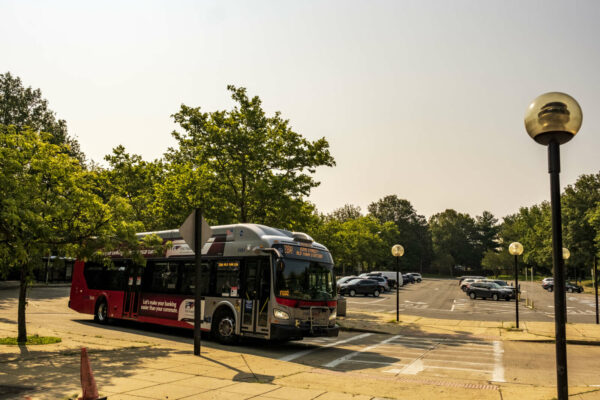 More than two years after the idea was first proposed, Metro has the approvals it needs to set the stage for mixed-use development around its West Falls Church station.

The Washington Metropolitan Area Transit Authority announced today (Thursday) that it has signed an agreement with a development group that will make over the 24-acre transit station area with more than 1 million square feet of office, retail, and residential space.

Branded FGCP-Metro, LLC, the development partnership consists of EYA, Hoffman & Associates, and Rushmark Properties. EYA and Hoffman are also part of the Falls Church Gateway Partners group behind the West Falls project that got key approvals from the Falls Church City Council earlier this week.

Falls Church News-Press reported on Monday (Aug. 9) that WMATA gave the developers a go-ahead to work on its land that day, according to a spokesperson from the Gateway Partners team.

“Building transit-oriented development is an important strategy for managing many of this region’s most pressing challenges, such as traffic congestion, sustainability, housing production, and transit ridership recovery,” Metro General Manager and CEO Paul Wiedefeld said. “The West Falls Church Metro Station is a unique opportunity that will convert underutilized parking lots to provide housing, jobs and economic opportunities, and create a cohesive development plan with the adjacent publicly-owned sites.”

In its news release, WMATA says the joint development agreement with FGCP-Metro will “generate long-term revenue for Metro through 99-year ground leases, in addition to fares from new ridership.”

Plans to turn the West Falls Church TSA into a mixed-use hub have been in the works since 2018, when the Fairfax County Board of Supervisors initiated a study to consider amending the county’s comprehensive plan for the transit station area.

The Metro Board of Directors authorized a solicitation of potential developers to build up the 24 acres of land that it owns by the station in January 2019.

According to a WMATA staff report, a feasibility study completed before the board’s vote determined that the TSA should be reconfigured and redeveloped to create “continuity” with the City of Falls Church’s planned development of the former George Mason High School site as well as a proposed expansion of Virginia Tech’s Northern Virginia Center.

While the West Falls project has moved forward, Virginia Tech abruptly dropped its expansion plans in March, though the change has not significantly altered the other development plans so far.

After two years of study by a task force appointed by Dranesville District Supervisor John Foust, the Fairfax County board approved a West Falls Church TSA comprehensive plan amendment on July 13, paving the way for Metro’s new agreement with developers.

“I am pleased that it envisions a vibrant mixed-use, pedestrian friendly environment and attractive public spaces, while respecting nearby established residential communities,” Foust said of the approved plan, though neighborhood concerns about the potential influx of traffic brought by the new development will need to be addressed.

Now that its agreement with WMATA is in place, FCGP-Metro still needs to get specific plans approved by Fairfax County, a process that is expected to unfold over the next year:

The rezoning application will include the detailed plans for the redevelopment of Metro’s parking lots with apartments, townhomes, neighborhood retail, and public green spaces. It will connect the proposed mixed-use redevelopment of the Meridian High School (formerly George Mason High School) site in the City of Falls Church to the West Falls Church Metro Station with new bike lanes, broad sidewalks, publicly accessible park spaces and a secondary grid of streets that will help alleviate some of the congestion in the area.

WMATA says it will hold a public hearing later this year on proposed changes to the West Falls Church Metro station commuter parking and bus facilities, including a replacement of the existing parking lot, a relocation of the bus bays, and a redesign of the Kiss & Ride facility.

Construction on the overall redevelopment project is expected to begin in 2023.