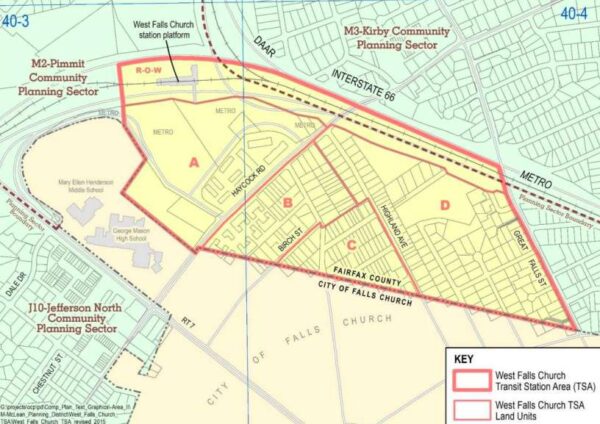 (Updated 4/7/21) After two years, the West Falls Church TSA Task Force pushed through a tense nearly-three hour meeting to finally approve an updated plan that will guide the overhaul of one of the Metro system’s most underused stations.

In recent meetings, some lingering divides on the task force sometimes escalated into heated moments between those with concerns about pedestrian safety and those pushing for approval of the plan to usher in new growth to the area.

“I think this plan exemplifies the transit-oriented development goals [and] represents an intensity of uses that we would expect for a vibrant, active Metro station,” Bryan Botello, a Fairfax County planner who helped oversee the task force, said.

Botello argued that the plan addresses two of the main concerns raised by task force members, namely ones related to pedestrian connectivity and safety and the efficiency of the area’s road network.

“I think this plan really balances the priorities of all road users,” he said. “…It should satisfy everyone and improves connectivity to the Metro for pedestrians and provides more efficient traffic operations.”

Covering roughly 156 acres near the West Falls Church Metro station, the new plan is a complicated patchwork of transportation and development suggestions.

The task force did hit a stumbling block when one of the major impetuses for its creation — the development of the Virginia Tech campus — was abruptly canceled earlier this year.

While county staff endorsed the plan, two of its most vocal critics, Christopher Szara and Paul Rothstein, who represent the nearby residential development The Villages, said the plan doesn’t go far enough in protecting and improving pedestrian transportation options in the area.

A motion by Rothstein to delay approval of the plan until further study by the Virginia Department of Transportation was struck down by the rest of the task force.

“We have had concerns…regarding traffic and the impact of the project outside of the scope of our discussion here, and the added impact of the WMATA project,” Szara said. “Traffic is a concern and I’m not convinced its been adequately addressed. I know over the last year we’ve been lulled into submission with regards to traffic, but having been a commuter for many many years I know how bad it can be, and having my son go to Haycock and him walking to school, I know how treacherous that can be.”

Szara, Rothstein, and task force chair David Wuehrmann voted no on the plan but were beaten by five votes in favor and one abstension.

McLean Citizens Association representative Darren Ewing had been a leading voice pushing for approval of the plan that evening.

“First and foremost, the [plan amendment] we’re entertaining here is consistent with the MCA’s long standing that density is appropriate at Metro sites,” Ewing said. “We have a failing Metro station with pre-COVID Metro ridership levels at 25,000 trips per day, one of the lowest number of trips in the entire Metro system. It’s not an inviting station, it’s a suburban parking lot, and it doesn’t encourage walking or biking. Even the park-and-ride is operating at 60% capacity pre-COVID.”

An email from MCA President Rob Jackson noted that, while the MCA is on record as supporting higher density at Metrorail stations, it has not adopted a position on the West Falls Church Comprehensive Plan Amendment.

“Our Planning & Zoning Committee will be preparing a resolution setting forth a recommended position that is expected to be presented to the MCA board at its June meeting,” Jackson said.

Following the task force’s approval, the plan will be discussed in a community meeting on Tuesday (May 11) before going to the Planning Commission on June 16 and Board of Supervisors on July 13.