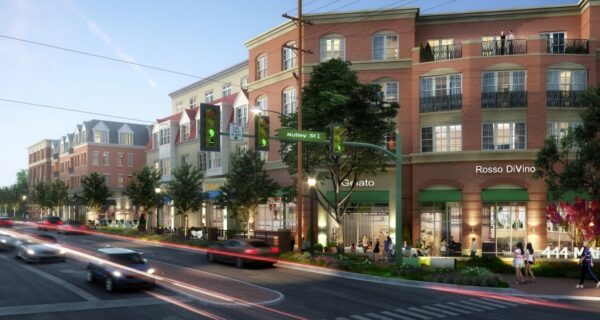 Drivers traveling down Maple Avenue may have noticed a chain-link fence around the Vienna Wolf Trap Hotel and the vacated Tequila Grande. The properties have long been idling, but the fence, which was erected earlier this year, suggests that demolition day could be within sight.

Business and town officials are still working on the four-story shopping and residential center at 444 Maple Avenue W. that the Vienna Town Council initially approved back in 2018 to replace the hotel and restaurant, which relocated to Oakton.

The project calls for approximately 20,000 square feet of commercial space on the ground with 151 multifamily rental units above, according to the town.

The project has stirred controversy since it was announced, as community members objected to its size and potential traffic impact in a town that has proven wary of development.

Construction documentation took about a year, and the developer submitted building permits to Fairfax County in September after being slowed down by the pandemic for about four months, Bell says.

Demolition permits are in the works, and the project is expected to have utilities capped off at the property soon. A permit allowing sewer and water services to be capped off in the Tequila Grande property line was issued on Feb. 4, according to the county’s permits and inspections database.

Bell says construction could begin in the early fall and take about 18 months.

Commercial tenants are already slated to take most of the business space available at the 444 Maple development, but it still has space for lease, according to company representatives.

Councilmember Howard Springsteen broke from the majority to vote against approving the project in 2018, citing the development’s size and traffic concerns.

The project has not yet had plans come before the town’s Board of Architectural Review, chairman Roy Baldwin said yesterday (Wednesday). The architectural board advanced the project in May 2018, saying that it met zoning parameters.

“All we were called on was whether this particular proposal met the zoning at that time,” Baldwin said, noting that didn’t mean whether they’d vote for or against the project.

The developer describes the planned mixed-use complex as a “walkable neighborhood destination” with luxury apartments, two levels of parking, a bike storage, a pet-washing station, and more.

Renderings show a central plaza by commercial spaces, trees around the property, and two courtyards — including one with a pool — surrounded by residential units.

Safety crews investigate after the partial collapse and demolition of a Surfside, Florida, high-rise (via NIST) Following the collapse of a 40-year-old high-rise in Surfside, Fla., officials in Fairfax County…

Read more →
More Stories
Poll: Do you support the McLean revitalization plan?12 homes on the market with mouthwatering kitchens