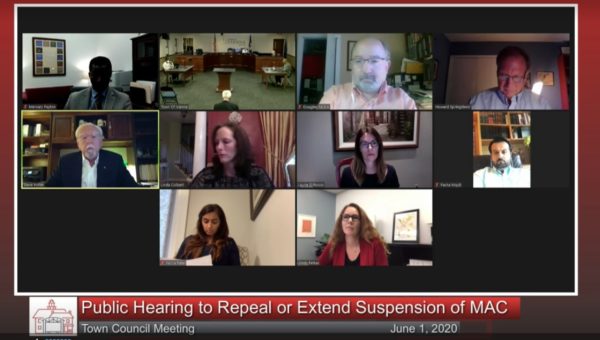 After years of pausing the Maple Avenue Commercial (MAC) zone in attempts to revamp it, the Vienna Town Council decided last night to repeal the zoning code and “start fresh.”

The Vienna Town Council held a public hearing last night on the two options for the MAC’s future: either repealing it or extending the moratorium, which has been in place since 2018, on the zoning code to June 2022.

To Repeal or Not to Repeal?

The two choices received a mixed reaction during the public hearing. Supporters for extending the MAC generally side that the zoning code has many good aspects that they don’t want to see completely scrapped, while supporters for repealing argued that town staff and consultants the town wants to hire need a clean slate.

Mary McCullough, who recently left the town’s Planning Commission, urged the Town Council to keep suspending the MAC until the code rewrite is done. “Repeal says we harmed,” she said. “That’s the message you send with repeal.”

Vienna resident Roy Baldwin said that repealing the MAC sends the message that the work from volunteers on the zoning code “is of no value.” Resident Ray Brill Jr. disagreed, saying that people’s hard work on the MAC is not enough of a reason to keep it.

“The fact that we repeal does not mean we don’t incorporate the vision and some of the things we like,” Brill added.

Cindy Petkac with the town’s planning and zoning division told the Town Council said she thought they would be “better off starting fresh.”

“I think it would be more efficient to repeal it,” Petkac said. “It is a cumbersome, confusing process in my professional opinion.”

The town’s plans to hire a consulting firm to help with rewriting the code also factored into the conversation last night about what to do with the MAC.

The Vienna Town Council initially paused its plans to hire a firm for $250,000 due to the COVID-19 pandemic.

Baldwin, the local resident, testified that he isn’t convinced the town needs to spend money on consultants when locals with expertise “will work for free.”

Council Douglas Noble argued that bringing in a consultant is even more important now to help the town heal from the pandemic. The Town Council will consider hiring the consulting firm on June 15, Mayor Laurie DiRocco said.

After the public hearing and some discussion among the councilmembers about the MAC, Noble proposed a motion to repeal it.

“It’s not about the MAC,” Noble said. “It’s about how do we make Make Avenue commercially economically viable?”

To quell some concerns about ditching the good parts of the MAC, Councilmember and Mayor-elect Linda Colbert offered an amendment that would make reports, studies, surveys, comments from the Planning Commission and Board of Architectural Review and more a part of the package of information the consultants would review.

A lively discussion continued on the idea to repeal, and Noble suggested withdrawing his motion, saying that he thought the councilmembers wanted to talk more.

Ultimately, the council approved Colbert’s amendment and then voted for Noble’s motion 4-3, with Noble, DiRocco and Councilmember Nisha Patel voting “no.”

“We learned over time the MAC code had flaws,” Noble told Tysons Reporter today. “I did not believe those flaws were fixable.”