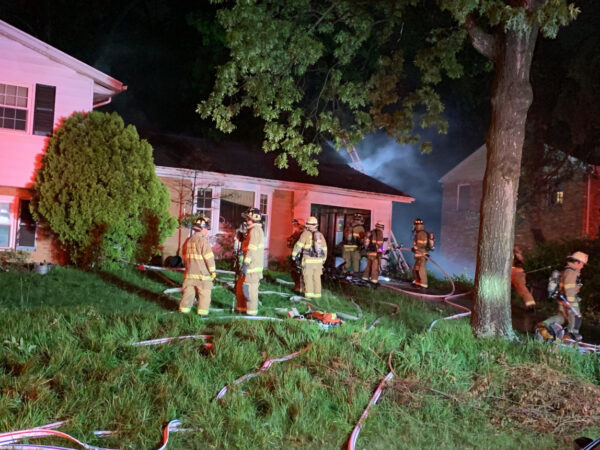 A house in Tysons caught fire after being struck by a lightning bolt during last night’s thunderstorm, the Fairfax County Fire and Rescue Department says.

Fairfax and Arlington county firefighters were dispatched to a two-story, single-family house in the 1900 block of Hull Road at approximately 8:57 p.m. yesterday (Wednesday).

Upon arriving at the scene, the units could see fire showing through the house’s roof. They “rapidly” extinguished the fire, and there were no reported civilian or firefighter injuries, according to the FCFRD report.

However, four occupants of the house have been displaced, and the blaze resulted in approximately $90,000 in damages.

FCFRD says that the house’s four occupants were all at home when the fire started:

Four occupants were home at the time of the fire. The occupants heard a loud bang, saw a flash of lightning, and then smelled smoke. All occupants evacuated the home. 9-1-1 was called. Smoke alarms did not sound due to the location of the fire.

Fire Investigators determined that the fire was natural in nature and started on the exterior of the home. The cause of the fire was a lightning strike.

The Fairfax County and Arlington fire departments also responded to a house fire in the 7700 block of Virginia Lane in Falls Church last night. A cause and estimate of damages have not been announced yet, but the blaze did not result in any reported injuries.

UPDATE- house fire in the 7700 block of Virginia Lane. Fire in attic. Fire now out. No reported injuries at this time. @ArlingtonVaFD assisting. #FCFRD pic.twitter.com/fFVp9y95Uo

Read more →
More Stories
Morning NotesAfter skipping 2020, the Memorial Day Ride of the Patriots is back and ready to rumble