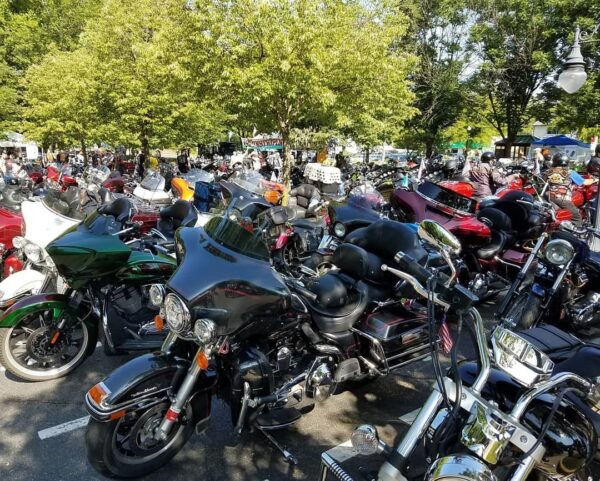 After a year off, the two-decade-old Ride of the Patriots in Fairfax is back and ready to rumble.

With the 2020 iteration canceled due to the pandemic, the Memorial Day weekend event and ride is returning to the D.C. area, but it will be scaled down a bit compared to previous years.

It will take place Friday (May 28) through Sunday (May 30) starting at Patriot Harley-Davidson on Fairfax Boulevard in Fairfax.

There will be vendors, food trucks, an appearance from the “Saluting Marine,” and a gathering of bikers.

There will also be two rides, each limited to 225 riders. On Saturday, the ride will begin at 11 a.m., and on Sunday, it will depart from Patriot Harley-Davidson at 11 a.m. to join up with AMVet’s Rolling to Remember in D.C. Registration to ride cost $25.

First held in 1999, the ride’s purpose is to remember and commemorate military veterans, particularly those who fought in the Vietnam War and those who remain missing in action. In recent years, there’s been a focus on veteran suicide.

An average of 17 veterans die by suicide per day, according to a recent report from the U.S. Department of Veteran Affairs.

In previous years, upwards of 12,000 bikers would join in on the festivities from across Northern Virginia and even the country. But this year, there will be significantly fewer participants.

Kevin Hardy, the event’s organizer since 2017 and marketing director at Patriot Harley-Davidson, thinks there will be about 300 to 400 bikes this year.

Hardy says the constantly changing COVID-19 health regulations over the last few months made it tough to plan for more than that. He’s excited, though, that the end of most capacity limits starting May 28 will allow Ride of the Patriots to happen again this year.

“You don’t want to not have it for two years. I’m a big believer in things being front of mind,” Hardy said. “If you don’t [hold the event], it kinda fades away with time.”

Hardy believes bringing awareness to veteran issues remains of the utmost importance. He also has a personal connection to the topic, with his father being a retired military colonel who served in the U.S. Army for 27 years.

“I think there’s a lot of change going in America today and a lot of what [these veterans] did enabled people to speak their mind and protest certain things,” Hardy said. “A lot of what America is and those rights were fought for by veterans.”

After starting in Fairfax, the Ride of the Patriot will proceed down Route 50 towards the District.

The Fairfax County Police Department confirmed to Reston Now, Tysons Reporter’s affiliate site, that they will temporarily close Route 50 between Patriot Drive and I-495 “to allow safe passage” for the riders starting around 11 a.m. on Saturday and at 10 a.m. on Sunday.

The hope is that next year’s event will be back to 2019 attendance levels with thousands of bikers making their way down Route 50 to pay their respects to those who have served.

“We’ll be ready to go in 2022 for thousands and thousands of bikes heading from here to D.C. in honor of veterans,” Hardy said.