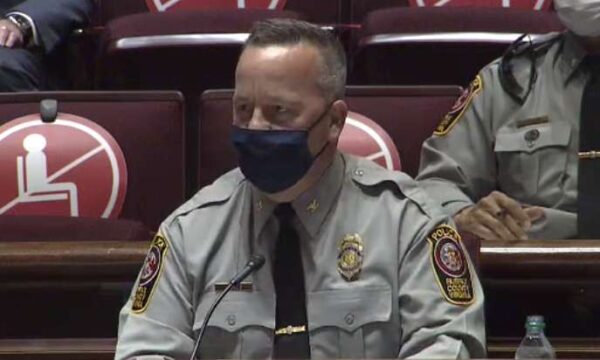 The local political group passed a motion at its general membership meeting yesterday (Tuesday) recommending that the Fairfax County Board of Supervisors fire Davis, reopen the police search, and implement a transparent hiring process.

“We believe we need to overhaul the criminal justice system from top to bottom, to end racial inequity in policing, end police brutality and build a police force built on trust where our residents don’t need to worry about protecting their families from the police sworn to protect and serve them,” FCDC said.

Davis’s hiring has drawn vocal criticism from civil rights advocates and community groups since he was appointed as retired Chief Edwin Roessler’s successor on April 23, particularly in the wake of an NBC4 report on two lawsuits that he faced while working as an officer in Prince George’s County, Maryland in the 1990s.

In one case, Davis reportedly stopped and violently arrested a driver, eventually leading to a $12,500 jury award to Mark Spann, who is Black. The other case involved Davis and a group of narcotics officers illegally detaining a 19-year-old, who later sued and won a $90,000 judgment.

Davis has also faced renewed scrutiny for his 2015-2018 tenure as commissioner of the Baltimore Police Department, which included a secret aerial surveillance program and a six-day lockdown of the predominantly Black Harlem Park neighborhood that is the subject of an ongoing lawsuit filed by the ACLU’s Maryland chapter.

“Hiring a candidate with a history of racially charged use of force incidents in their past is not starting from a place where community trust can be built,” FCDC said.

A spokesperson from his office declined to comment on the FCDC motion, which was developed by the committee’s Black caucus. The committee says in a press release that it was “overwhelmingly” supported by its 1,000-plus members.

In lieu of a comment, McKay’s office shared a letter sent to FCDC on May 20 that touted Davis’s “ability to implement progressive reforms,” citing his efforts to implement changes in Baltimore like the introduction of body-worn cameras and a revised use-of-force policy that emphasizes deescalation.

The letter, which was signed by all nine Democratic supervisors, also defended the level of public engagement used during the police chief hiring process. The search included a pre-screening panel, a survey that generated over 3,000 responses, and an outreach campaign with over 275 community meetings and calls.

Davis also participated in a public input session during his first week as the new police chief — albeit with continued controversy.

“We are confident that this year’s process was the broadest and incorporated both extensive public input and intentional inclusivity,” the Board of Supervisors letter said. “Regardless, we commit to looking at our entire public participation process for future personnel decisions and establishing a framework for further improvement.”

The board also stated that it “fully understands that the history of policing has not centered around the safety and well-being of all members of the community,” acknowledging systemic problems in the U.S. and county.

As noted by the Fairfax County NAACP, the FCDC motion on Tuesday came exactly one year after former Minneapolis police officer Derek Chauvin pressed his knee on the neck of George Floyd. A jury convicted Chauvin of murder in the death of the 46-year-old Black man on April 20.

The civil rights organization reiterated in its statement released today (Wednesday) that it “does not have confidence in the process by which the new Police Chief was hired, nor in its results,” calling for people to contact supervisors and amplify their concerns on social media.

“Whether in Minneapolis or Fairfax, the issue of police brutality is real, and time and time again, we are told that our fears and outrage are misplaced,” the Fairfax County NAACP said. “What the Board of Supervisors refuses to acknowledge is the validity of our concerns over the hiring process and our experience of being dismissed when asked for feedback.”

Earlier on Tuesday, Davis, who started the job on May 3, shared a plan for his first 100 days at a Board of Supervisors public safety committee meeting. His plan included revamped procedural justice and implicit bias training that he, command staff, and others are testing before rolling out to the entire department.

“Accountability and training used to be kind of buried inside police department organizational structures. It needs to be elevated and highlighted,” Davis said.

Davis also said he plans to be inclusive with a community advisory council for his department, saying that, int he past, he has included the American Civil Liberties Union, the NAACP and other advocacy groups.

During the committee meeting, the board also discussed a draft policy that Davis presented to scale back when police are involved in a pursuit.