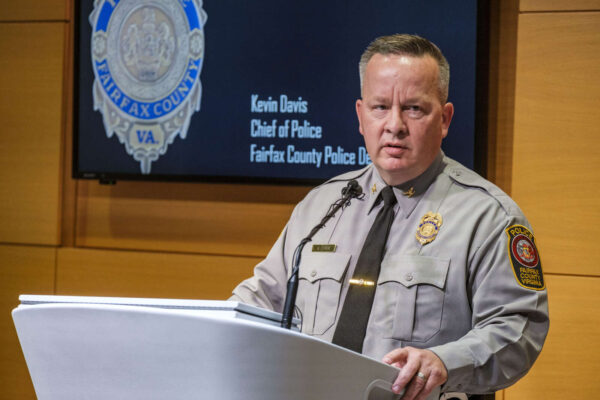 (Updated at 5:05 p.m.) Kevin Davis’s first challenge as Fairfax County’s new police chief is to earn the public’s trust, and if the community input session held last night (Thursday) was any indication, it will be a formidable task.

In a virtual discussion that lasted more than two hours, caller after caller expressed dismay at what they believe was insufficient transparency and community engagement from the Fairfax County Board of Supervisors during the hiring process, leading many to question that if the county made the right decision in appointing Davis.

“The Board’s closed-door deliberations and no community involvement in the vetting process left us in the dark. This, coupled with press revelations after the selection, rendered the process fatally flawed,” Diane Burkley Alejandro, lead advocate for the immigrant rights organization ACLU Power People Fairfax, said during the session.

Late last month, NBC4 reported that Davis had faced — and lost — civil lawsuits in the 1990s related to the use of force and unconstitutional detainment while on the job in Prince George’s County.

Callers also brought up concerns about Davis’ authorization of secret aerial surveillance while he was Baltimore’s police commissioner as well as comments he made in a 2020 Baltimore Sun op-ed about defunding the police.

The Board of Supervisors acknowledged that the community has expressed concerns about Davis’s record in a broad statement earlier this week, but county leaders have not wavered from their position that he was the best choice to lead the Fairfax County Police Department and implement the reforms that the board has been seeking.

“Your hiring of Mr. Davis in today’s environment is just plain tone deaf,” Hunter Mill District resident Diana Smith said yesterday, directing her ire to the board. “…It sends a really negative message. I think this was a really flawed decision based on a really flawed process, which led to a flawed selection of a candidate.”

A number of callers backed Fairfax County NAACP’s call last week for a new police chief search, a stance that has won support from other community groups throughout the week.

“I and other community organizations expressed not only the lack of community engagement but the type of community engagement. It’s fine to check a box and say ‘we did a survey, we had community meetings’ but was that enough and were we really heard?” Amanda Andere, a member of the Chairman’s Equity Task Force, said. “We need to start over. We need a process rooted in equity that starts and ends with community input.”

For Davis’s part, he acknowledged the criticisms in his opening remarks and said that he made mistakes over the years but plans to continue to work to gain the community’s trust.

“I have certainly changed, grown, and have learned many lessons throughout the course of my career,” Davis said in response to one caller. “Every year along my journey, I’ve learned more and have become more attuned to community expectations and sensitivities…Was it always a perfect journey? No.”

Throughout the night, Davis reiterated that he was proud of his career, the progress he’s made in terms of building trust with communities of color, and his belief that he has been “one of the most progressive reform leaders in our country.”

“I’ll follow my own mother’s advice…by being the best chief of police I can possibly be,” Davis said.

Even though callers frequently directed questions to them, Board of Supervisors Chairman Jeff McKay and Lee District Supervisor Rodney Lusk, who chairs the Public Safety Committee, rarely responded to the callers and largely limited comments to their opening and closing remarks.

Some questioned if the board had to sign non-disclosure agreements regarding the process of selecting a new police chief. Neither responded to those inquiries.

A county official confirmed to Tysons Reporter that board members signed NDAs but said this is not an uncommon practice when the board interviews job applicants to preserve their anonymity.

Neither McKay nor Lusk seemed to entertain the idea of redoing the search for a new police chief.

“We are aware that there’ve been some instances that have come to light that have caused concern in our community. I want to reiterate that we have heard those and we understand those,” McKay said in his opening remarks. “We know that [Davis] brings with him extensive experience in police reform, and we know that he will move Fairfax County to the next level.”

In his closing remarks, Lusk, who is Black and has spoken about his own painful experiences with police, explained his thought process when it came to selecting Davis as police chief.

Davis also addressed media for the first time this morning (Friday) in a press conference where he again highlighted his past achievements and answered questions about past incidents and lawsuits.

“I was twenty four years old in 1993. Would a 52-year-old Kevin Davis handled that incident differently now? No doubt about it,” he said in reference to the 1993 encounter that left a young Maryland law student bloody in front of his family’s home.

Referencing the 1999 incident where he was accused of false imprisonment and roughing up a teenager, resulting in a $90,000 settelment for the victim, he reiterated what he told the Baltimore Sun in 2015.

When asked if he disclosed these incidents to the Board of Supervisors during the hiring process, he said only that the process was “comprehensive and exhaustive.”

He also spoke about his plans to institute reforms in a police department that has had a history of using force against people of color, while also addressing morale within the department.

Read more →
More Stories
This weekend’s open houses: May 7, 2021Here are the top Tysons Reporter stories of the week