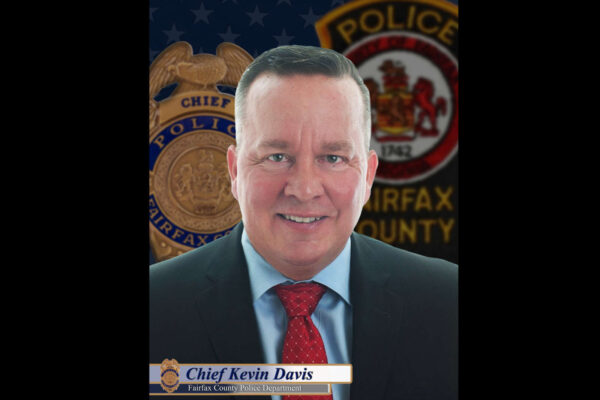 Fairfax County Board of Supervisors Chairman Jeff McKay remains confident in the board’s choice of former Baltimore Police Commissioner Kevin Davis as the county’s next police chief, despite reports that he previously faced lawsuits over use-of-force incidents.

With Davis set to assume his new position on Monday (May 3), McKay told Reston Now in a statement that he continues to support the new police chief.

“The history of policing has not centered around the safety of all members of the community. That is a systemic problem we are always working on in Fairfax County,” McKay wrote. “After an extensive interview and outreach process, the entire Board felt confident in Chief Davis’s ability to lead and further reforms to policing. We look forward to everyone in the community engaging with the new Police Chief and engaging in their own conversations with him.”

The board of supervisors unanimously voted on Friday (April 23) to appoint the former Baltimore police commissioner and Prince George’s County assistant police chief to lead the Fairfax County Police Department.

At the time, Fairfax County Board Supervisor Jeff McKay hailed Davis and said in a statement that he would “continue Fairfax’s work on police reform, build on the deep community involvement and relationships with stakeholders, and improve morale within the police department.”

However, NBC4 Washington reported earlier this week that Davis had lost at least two civil lawsuits related to inappropriate use-of-force and false imprisonment while he was on the job in Prince George’s County.

One of the lawsuits was related to a 1993 incident where Davis reportedly stopped law student Mark Spann in front of his family’s Maryland home.

“At that point, Davis says, ‘Give me your hands’ and lodges me to the ground, throws me to the ground, and proceeds to mash my face into the pavement,” Spann told NBC 4.  He also said that Davis continued to intimidate him with a baton on the drive to the hospital and subjected him to further insults.

“I have to this date never experienced such racial slants, slurs and epitaphs and the denigration,” Spann said.

Spann has dried blood on his face in footage from an interview that NBC4 conducted with him in 1993.

According to NBC4, Spann was charged with battery, resisting arrest and disorderly conduct, but it remains unclear on why Davis pulled him over in the first place.

Another lawsuit filed six years later accused Davis of false imprisonment when he was sergeant in the Prince George’s County Police Department. The victim also won that case.

Davis, for his part, told NBC 4 in a statement that he was “proud of my long career,” which he says includes a history of reform, a commitment to diversity, body camera implementation, police displicne transparency, and use of force de-escalation.

He will be tasked with the full implementation of Fairfax County’s body camera program throughout 2021. So far, cameras have been deployed at five of the police department’s eight district stations, including in the McLean District.

His career began in 1992 with the Prince George’s County Police Department where he rose through the ranks to assistant chief. In 2013, he became chief of police in Anne Arundel County. Shortly thereafter, he got the top job with the City of Baltimore and served as the police commissioner there for three years.

He was fired in 2018 by then-Mayor Catherine Pugh due to her growing “impatient” with his inability to lower the number of murders in the city.

Upon his selection by the Board of Supervisors, Davis addressed the board, police officers, and the public via video call.

“This is a humbling moment for me,” Davis said. “I will take it very seriously and I promise not to let you down.”

Davis complimented the Fairfax County Police Department while also noting the need to do better.

“You guys are a great agency. I want to say that loudly and clearly,” he said. “Is there room for improvement? Of course. Are you up to the task? Of course. Is change sometimes hard or difficult? Absolutely. We have to seize this moment and continue to get better.”

On accountability, Davis said he’d be “calling balls and strikes” and “no one hates a bad cop more than a good cop.:

In terms of reform, Davis says it’s in the benefit of the officers.

“Reform is something we do for police officers, not to you. It makes you better,” he said.

Fairfax Coalition of Police Local 5000 President Sean Corcoran said last week at a public safety forum that the county police department was in a “tailspin” due to the number of officers that have been leaving the department due to low morale and frozen pay.

Corcoran tells Reston Now that he believes Davis will be a “good addition and leader” for the FCPD.

“As the first person to hold this office from outside the Department, we welcome Chief Davis and look forward to working collaboratively with him to recognize the true potential of our Police Department and to best serve the communities of Fairfax County,” Corcoran wrote.

Davis said also on Friday that it will be a priority of his to earn legitimacy by establishing trust with the “diverse communities” of the county. That will require paying attention, he said, to communities of color and other vulnerable, underserved groups.

“We have to meet you where you are, be better listeners, be less defensive and quite frankly, see you,” he said. “You have my word that I’m committed to doing that on behalf of Fairfax County.”