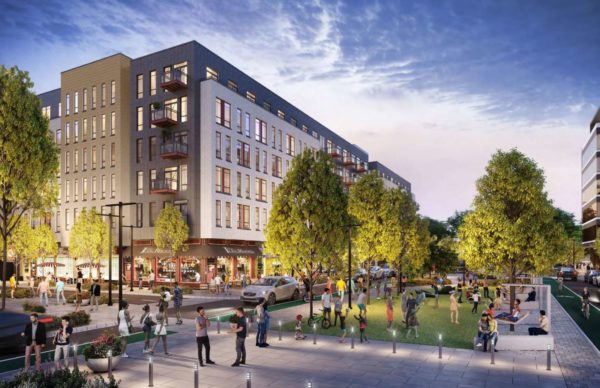 The City of Falls Church will hold a virtual town hall meeting at noon this coming Friday (Jan. 8) to discuss proposed changes to the West Falls Church Economic Development Project, an extensive mixed-use development that has already been in the works for two years.

This will be the second town hall on the project since developer Falls Church Gateway Partners told the Falls Church City Council in December that it needs to revise its agreement with the city in response to the impact of the COVID-19 pandemic.

“The pandemic has caused a constriction in commercial real estate markets for new investments in hotel, office, and retail,” City Manager Wyatt Shields said at a Dec. 14 city council meeting. “The developer…requests changes to terms of the Comprehensive Agreement in order to be able [to] proceed with obtaining financing for the project.”

The composition of the project will largely remain the same, with no alterations to the proposed ratios of hotel, office and civic space, senior housing, and condo and apartment residential units.

However, Gateway Partners says the project delivery date will be delayed by six months. The developer also wants to reduce its capitalized lease payments from $34.5 million to $25.5 million, increase ground rent payments, and revise provisions for profit sharing with the city.

If approved, the amendments would come on the condition that Gateway Partners completes the demolition and rough grading of the George Mason High School property by the end of May 2021.

The developer has also committed to finishing the negotiation of agreements with a prospective grocer, office developer, and senior housing developer by Mar. 1.

Imagined as a future gateway to Falls Church City, the West End development is expected to have approximately 123,000 square feet of retail anchored by a grocery store, along with 17,000 square feet of civic space that will include a conference center and an outdoor Commons area for music and entertainment.

According to the project website, the residential components include between 150 and 250 senior housing units, up to 302 condo units, and approximately 400 multi-family apartment units. 6% of the total units will qualify as affordable dwelling units.

The plans also feature approximately 325,000 square feet of commercial office space and a limited or full-service hotel with about 146 rooms.

The Falls Church City Council will hold a public hearing and take a vote on the proposed project agreement amendments on Jan. 11.