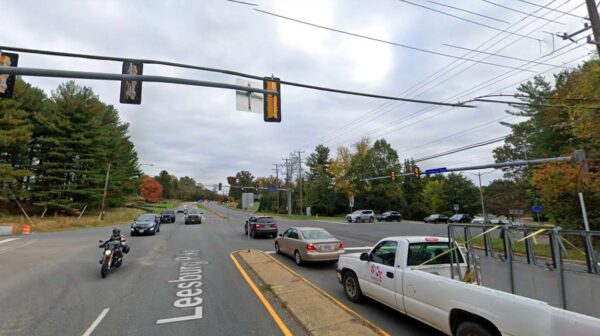 The Virginia Department of Transportation is moving forward with plans to overhaul the intersection of Towlston Road and Leesburg Pike (Route 7), but despite requests from local residents, the highway’s speed limit will not be reduced after construction is finished.

VDOT officials say the need to move traffic to and from Tysons will keep the speed limit on Route 7 at 55 miles per hour.

VDOT discussed the changes coming to the Route 7 and Towlston intersection at a virtual town hall hosted by the Great Falls Citizens Association on March 31.

The need for improvements to the intersection emerged in the aftermath of a fatal crash in December. At the meeting, officials said the incident occurred when a vehicle traveling southbound on Towlston Road attempted a left turn onto Leesburg Pike. A distracted driver ran through the red light and struck the turning vehicle.

“What the community is seeking is an assurance that the intersection will be as safe as possible when VDOT completes its work under the widening project,” GFCA executive board director Mike Barclay said.

Barclay said that the intersection improvements need to ensure that, when a car turns left on Route 7 from Towlston, the driver “will have an unimpeded view of traffic traveling west on Route 7.”

Public feedback at the meeting ranged from urges to reduce the speed limit to a call to convert the intersection into a four-way stop.

Some of those concerns, particularly regarding sight-lines, should be waylaid by the current project to widen Route 7 from Reston to Tysons, VDOT said.

As part of the project, extended turn lanes will be added to Leesburg Pike to make it easier for trucks to turn onto Towlston Road, a response to the common complaint that trucks turning at the intersection often block several lanes of traffic.

“We’re still not in the final configuration,” Kuntz said. “It is still a work in progress. We want to make sure everyone recognizes: what you see today is not the permanent configuration.”

But VDOT said there are no plans to reduce the speed limit on Leesburg Pike.

“Reducing speed on Route 7 is not an option,” VDOT district construction engineer Bill Cutler said. “It’s a highway to Tysons and needs to be able to move people along.”

However, changes will be made to Towlston Road, which will be reduced to 25 miles per hour near the intersection.

Cutler said VDOT will also be working with the contractor and the operations center to optimize timing at the signal as part of a broader effort to synchronize signals throughout the Route 7 corridor.

“We expect that this will function well,” Cutler said. “Now, it won’t function perfectly because we’re in Northern Virginia. Nothing functions perfectly, but it should function better than it has in the past. We’ll take counts and see how that holds up compared to our forecasts, and certainly to reality.”