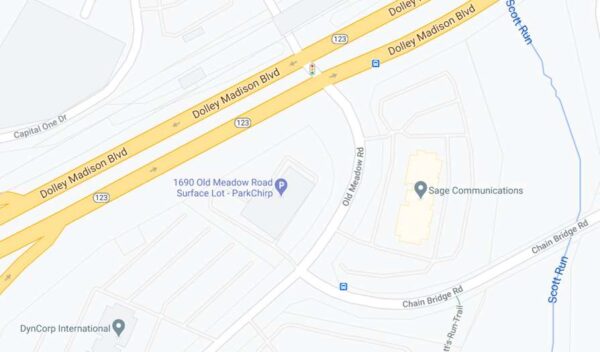 Updated at 7:20 p.m. on 4/1/2021 — The Dulles Corridor Metrorail Project has postponed the single-lane closure on Old Meadow Road near Route 123 that was scheduled to take place tomorrow “until further notice.”

Earlier: The left lane of Old Meadow Road leading up to Route 123 in Tysons will be closed during much of the day on Saturday (April 3), the Dulles Corridor Metrorail Project announced earlier this week.

Prompted by the need for “minor asphalt repairs,” the closure will encompass one block near the intersection with Old Chain Bridge Road. It will take effect at 9 a.m. with all lanes scheduled to reopen by 4 p.m.

The Dulles Corridor Metrorail Project says that, with the assistance of flaggers, traffic will be maintained in both directions, and drivers will be able to turn onto Old Meadow Road and Route 123. The parking lots at 1690 Old Meadow Road and the CityLine property will still be accessible.

“Performing this work on the weekend will minimize impacts, avoid interference with other projects along Old Meadow Road and maximize the safety motorists and pedestrians,” the Dulles Corridor Metrorail Project said.

The asphalt repairs are connected to efforts to realign Old Meadow Road with Capital One Tower Drive along Route 123, work that has now been going on for a year. The Dulles Corridor Metrorail Project previously predicted that construction would be completed by the end of 2020, but this would not be the first time that the project has taken longer than expected.

The Dulles Corridor Metrorail Project is overseeing the development of Metro’s Silver Line. It is a partnership between the Washington Metropolitan Area Transit Authority (WMATA), Fairfax County, Loudoun County, Town of Herndon, and the Metropolitan Washington Airports Authority (MWAA).

The Silver Line’s first phase opened in 2014, while the second phase, which will extend the transit system into Loudoun County, is still inching toward completion.