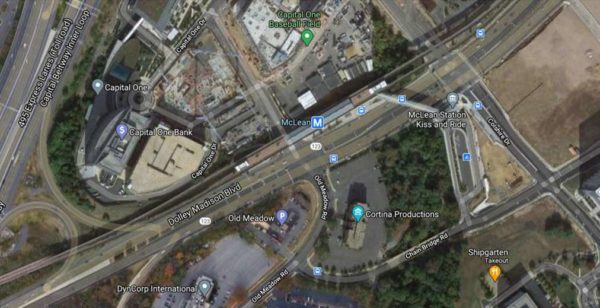 The realignment of Old Meadow Road with Capital One Drive along Route 123 in Tysons is nearly complete.

The Dulles Corridor Metrorail Project announced yesterday (Tuesday) that crews have finished the final asphalt, curb, and striping work on the project, which is being managed by the Metropolitan Washington Airports Authority as part of its expansion of Metro’s Silver Line.

“Crews have installed the pedestals for the pedestrian walkway signals and the signal work will be done in the near future,” the Dulles Corridor Metrorail Project said in its update. “Demobilization of the worksite has started and will be completed by the end of December.”

Work on the street realignment has been underway since March and was originally expected to finish in August. The Dulles Corridor Metrorail Project cited changing site conditions and challenges presented by the COVID-19 pandemic as the cause of the delay.

Fairfax County and the Virginia Department of Transportation requested that MWAA realign Old Meadow Road at Dolley Madison Boulevard to improve access to the Capital One complex, which was affected by Silver Line construction at the McLean Metro Station.

According to the Dulles Metrorail Corridor Project, project officials had contemplated a proposal that would have closed Old Meadow long-term, but traffic studies illustrated that the impact would be too extreme.

Final completion of the realignment project has been set for the end of this year, pending Dominion Energy’s schedule for energizing the meter for the new pedestrian signals.