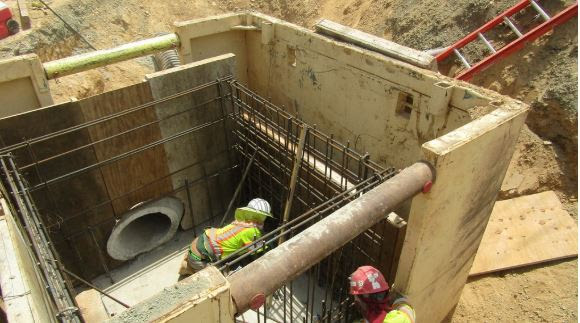 Work to shift the travel lane started in the spring and was slated to be finished by mid-August. Now, drivers and pedestrians likely won’t see the change until the end of the month, according to an update from the Dulles Corridor Metrorail Project.

“Adjusting to the COVID-19 outbreak and differing site conditions delayed the completion of the first phase of the work, which included sidewalk and pavement demolition,” according to the update.

The realignment aims to improve access between the Capital One campus and Old Meadow Road. The work is a part of the Metropolitan Washington Airports Authority’s Silver Line project.

The Dulles Corridor Metrorail Project noted that crews from subcontractor W.M. Schlosser have finished drainage infrastructure and are working on signal equipment and landscaping along the south side of Old Meadow Road and the east side of Dolley Madison Blvd.

Once the lane shifts are completed, the crews will then start constructing a new median on Old Meadow Road at the intersection.

Work on the median, which is expected to start at the end of August, will require a southward lane shift of eastbound Old Meadow Road, according to the update.