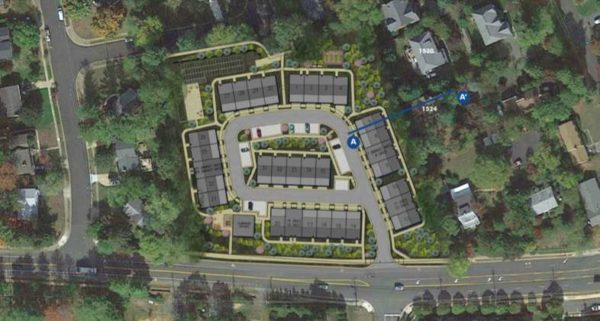 After a two-week delay, the Fairfax County Planning Commission voted on March 17 to support a proposed senior living facility in McLean.

Tri-State Development Companies secured a recommendation from Fairfax County planners in February to build on the 3.23-acre site at 1638 and 1642 Chain Bridge Road. The project would replace the existing single-family dwellings with 35 independent living units, five of which are expected to be sold as affordable.

The commission previously deferred making a decision on the project after a public hearing on March 3. Speakers voiced concerns about the heights of the units, potential traffic congestion, stormwater runoff, and the impact of a proposed clubhouse and patio on an immediate neighbor of the site.

Dranesville District Commissioner John Ulfelder recommended that the Fairfax County Board of Supervisors grant Tri-State’s special exception request after addressing several of the issues raised at the public hearing.

Ulfelder said the building heights would range between 36 and 40 feet, exceeding the 35 feet permitted in a R-3 zone, to allow for certain roof structures of the units to fit the surrounding neighborhoods.

“In addition, due to the typography of the site, the homes are set at a lower grade level than the surrounding homes,” Ulfelder said. “As a result, the roof heights are actually roughly comparable to the neighboring properties.”

In response to suggestions that a traffic signal be installed at the intersection of Chain Bridge and Davidson Road, Ulfelder noted that a traffic analysis predicts the facility would generate only 85 vehicle trips per day — fewer than what would be generated by a by-right development. The analysis also projected fewer than 10 trips in either the morning or evening peak hour.

He added that Virginia Department of Transportation traffic analysis done as part of the ongoing McLean Community Business Center Comprehensive Plan study concluded that a signal at the Chain Bridge/Davidson intersection might not be warranted for 20 years.

Ulfelder said the applicant has nonetheless “agreed to reserve space near its entrance for the installation of a future traffic signal if it is warranted.”

He said that the stormwater runoff concerns were addressed by Tri-State’s commitment to install a new stormwater system on the site that would exceed what is required by the county and state.

“This will result in the detention of storm water on site and should result in an improvement for the downstream neighbors with less storm water being released from the site during rain events,” Ulfelder said.

Ulfelder also addressed the construction of the proposed clubhouse and patio, which was a concern for Bobbi Bowman, who lives in a property that abuts the site.

According to Ulfelder, Tri-State has flipped the clubhouse’s layout, moving the patio to the west side of the building, where it will be blocked from Bowman’s property. He also said hours of use for the patio would be restricted, with no music allowed outdoors and no happy hour or cocktail parties.

“I believe these changes adequately address the neighbor’s concerns about the possible impact of the patio on her peaceful and quiet enjoyment of her property,” Ulfelder said.

Mary Cortina, who represents Braddock District, was the only commissioner to oppose permitting the project.

While she expressed an appreciation for its design, stormwater retention plan, and amenities, Cortina argued that the site is not large enough for the number of proposed units and would create too much density without “adequate buffering to the surrounding neighborhood.” She also worried that the high density would result in insufficient tree preservation.

“It’s not neighborly to remove all the trees and max out the site, even if it is beautifully designed and serves a priority segment,” Cortina said. “Fairfax County has a wave of senior developments to accommodate, but if we want them to incorporate into existing neighborhoods, they need to meet the setbacks and the other standards in the zoning ordinance to fit into the neighborhood.”

Tri-State’s proposal will go before the Board of Supervisors for a public hearing on May 4 at 3:30 p.m.