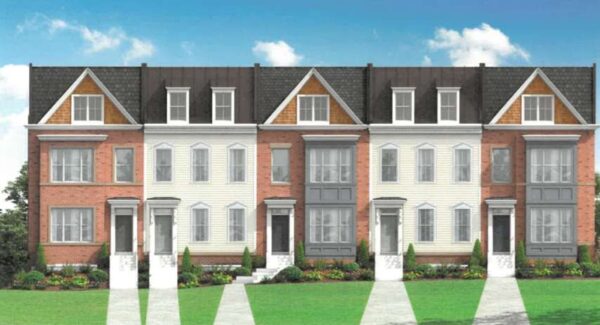 Sekas Homes is planning to replace a two-story office building next to the mini-roundabout on Park Street in Vienna with a quintet of townhouses that will be priced “in the low $1 millions,” the developer says on its website.

The Town of Vienna Board of Architectural Review is scheduled to discuss Sekas’ request for approval to construct the proposed Cadence on Park development at 201 Park Street SE during its meeting tonight (Thursday).

Dated June 2020, the site plan calls for the construction of five attached condominium townhomes on a 0.41-acre lot. The buildings would be approximately 33 feet tall above grade with four floors and a rooftop terrace.

The plan proposes a total of 14 parking spaces, including two garage spaces per unit and four surface spaces for visitors. Utilities would be located underground, and the site would feature a concrete pad surrounded by a six-foot wooden fence for trash containers.

Sekas, which built a similar townhome complex on Center Street in 2019, has committed to providing new road and sidewalk development as part of the Park Street proposal, according to its application to the Vienna Department of Planning and Zoning.

In order to build the townhomes, Sekas plans to demolish the existing structure at 201 Park Street SE.

The office building had been primarily occupied by medical practices, but most of the tenants have now retired, according to an individual with Vienna Hearing Center, the last remaining occupant.

The person told Tysons Reporter that Vienna Hearing Center will be relocating just down the road to the office complex at 124 Park Street SE. The audiology clinic is scheduled to move out of its current space on March 26 and will start seeing patients again at its new location on March 30.

Image via Cadence on Park L.C./Town of Vienna