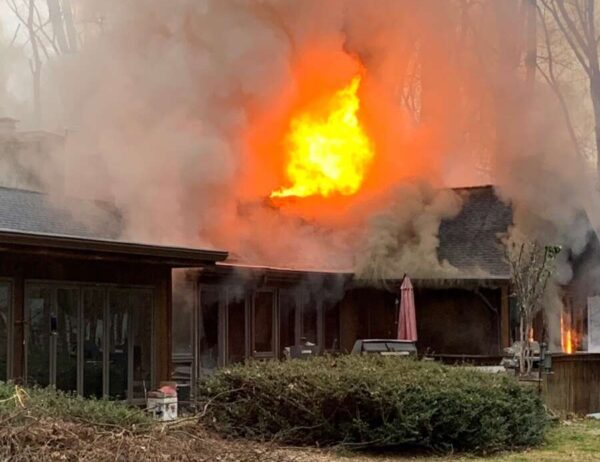 A house fire on the 9700 block of Meadowlark Road in Vienna displaced seven people on Tuesday (March 16).

Fairfax County Fire and Rescue Department units were dispatched to the single-family home at approximately 6:04 p.m. There was “heavy fire and smoke showing” when they arrived on the scene, the FCFRD said in a report released yesterday.

While no civilians were injured, one cat died in the fire, and a firefighter was transported to a local hospital with minor injuries. The firefighter has since been released.

The fire was detected when one of the three people who were in the house at the time smelled smoke. The occupants evacuated and called 9-1-1 after seeing smoke and fire issuing from the basement. Three dogs were also present and “escaped the fire unharmed,” according to the county fire department.

“Fire Investigators determined that the fire was accidental in nature and started in the basement,” the FCFRD said. “The cause of the fire was combustible materials too close to the operating fireplace.”

The fire produced approximately $378,750 in damages. The house’s seven residents are receiving Red Cross assistance after being displaced.

This is the fourth house fire reported in Vienna within the past 10 days.

A house fire on Bowling Green Drive on March 10 and one on Hunt Country Lane in the Wolf Trap area on March 11 each displaced two people. There was also a house fire on Baton Drive in Vienna on Monday (March 15). No people were at home at the time, but neighbors saved a dog that was present.

A combination of strong winds, relatively low humidity, and warming temperatures makes fires more common during this time of the year, according to the Virginia Department of Forestry.

When the National Weather Service issued a Red Flag Warning for Fairfax County on March 11, the Fairfax County fire department warned that cigarettes and other smoking materials discarded in mulch or brush could spark a significant fire.