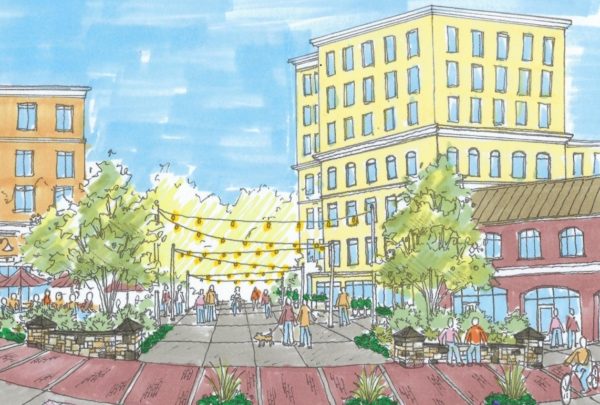 (Updated 5 p.m. — This article has been updated to correct the number of residential units being proposed and to expand the sources of residents’ concerns.)

The meeting takes place from 9-11 a.m. and will be accessible via this link.

The new draft includes changes that address building heights and environmental guidance, Fairfax County Planning Division Director Leanna O’Donnell says. Many of the tweaks were made in response to concerns raised by community members about a draft of the plan that was released on Dec. 9.

“This is an exciting opportunity to bring forward the vision plan developed by the community, take it and get it into our Comprehensive Plan formally,” O’Donnell said. “We look forward to continued engagement with the draft as we move forward.”

Some residents, including a coalition of local neighborhood associations called McLean Citizens for Right Size Development (Right Size McLean), have developed a laundry list of concerns about the December draft plan and representation on a task force appointed by Dranesville District Supervisor John Foust.

Right Size McLean recently issued a survey that drew about 600 responses from an even mix of young and old, new and longtime residents, group member Linda Walsh says.

While the full results will be released later, Walsh said that 90% of respondents oppose bringing the total number of residential units downtown to 3,850 units.

The increasingly vocal opposition comes as a culmination of three years of work by county staff draws nearer. A recommended new comprehensive plan will be presented to the Fairfax County Planning Commission for a public hearing on Apr. 28, followed by a hearing by the Board of Supervisors on May 18.

The McLean CBC study process began in 2018 when consultant StreetSense worked with members of the McLean community to draft a 10-year “Vision Plan.”

“Everyone was invited to participate and hundreds did,” Foust said of the visioning process. “It was a good process and almost everyone who participated was supportive of the Vision that was adopted.”

Residents shared their visions for McLean and the amenities it would offer. The plan outlined incentives to attract commercial and residential developers to McLean with requirements for contributing toward community benefits such as open spaces.

First convened in May 2018, Foust’s McLean CBC task force is responsible for converting this vision into a 25-year Comprehensive Plan that will be used to evaluate future development proposals.

The plan divides the heart of McLean into three zones: Center, General and Edge, with building heights tapering down, respectively, O’Donnell said.

It sets requirements for parking, stormwater management, multimodal transportation, and the provision of open spaces and other community benefits. The overall goal is to create “a revitalized downtown that is more vibrant and pedestrian-friendly and that creates a real sense of place,” Foust said in an email to Tysons Reporter.

Today, the draft plan envisions a maximum of 3,850 residential units to the downtown area, 1,675 more units over what the Vision Plan proposed. O’Donnell said this increase was calculated based on market projections and interest from property owners.

“That number [3,850] is a maximum and the timeline is unknown and market-driven,” the county planning director said.

Overall, however, Right Size McLean and other opponents of the draft say it strays too far from the Vision Plan.

“We felt the Vision Plan captured the concerns of the citizens,” Walsh said. “Where we might not have liked all the growth, we thought there was definitely a consideration for the abutting communities.”

The group also feels that the task force did not truly address issues from the community’s perspective, she said.

Opponents have criticized the task force as representing only a narrow segment of McLean’s population, noting that some members have in the past participated in one or more of the same organizations or do so currently.

Foust acknowledged that the composition of the task force has been questioned but defended the group, saying members deserve gratitude for the thousands of hours they put in.

“Together they represent an excellent cross-section of residents and their interests,” he wrote to Tysons Reporter. “…My opinion, as a longtime community activist in McLean and as McLean’s Supervisor for the past 13 years, is that this task force was very representative of McLean residents.”

Additionally, Franklin Sherman Elementary School PTA President Sonali Wickrema sent a letter to Foust and Fairfax County staff on Feb. 8 saying that the county “misleadingly suggests that the PTA has participated in the Task Force” by mischaracterizing an informational meeting that the PTA co-hosted in February 2020.

“That meeting was solely to provide information and did not provide an opportunity for substantive comments or to endorse the plan,” she said.

Foust countered that a PTA member has been attending meetings regularly and many Franklin Sherman parents have participated in the process.

“I suspect and hope they will continue to participate as the proposed plan proceeds,” he said.