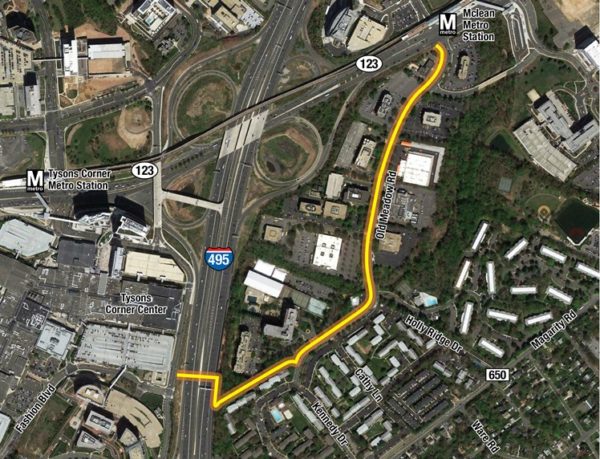 A new pedestrian bridge and shared-use trail linking Tysons Corner Center to the McLean Metro station is on track to start construction this summer, the Virginia Department of Transportation says.

The project will introduce a bridge for pedestrians and cyclists over the Capital Beltway, along with a 4,662-foot-long, 10-foot-wide path between I-495 and Route 123 along the west side of Old Meadow Road.

“I think this is going to be a good thing for Tysons,” VDOT Senior Project Manager Abraham Lerner said. “It will continue to go along with the goals of the Board of Supervisors and Fairfax County staff to implement multimodal measures and to try to reduce the dependence on the private automobile.”

This pedestrian and bicycle improvement at the I-495/123 interchange has been in the works for years as part of a commitment that VDOT and Fairfax County made when the Beltway was widened to accommodate toll lanes.

The I-495 Express Lanes project, which was completed in November 2012, called for the addition of pedestrian and bicycle connections throughout the Beltway corridor from Braddock Road in Annandale to Lewinsville Road in McLean.

However, a crossing at the 123 interchange could not be built at the time because of “a number of physical and geometric reasons,” Lerner says. So, Fairfax County and the state committed to constructing one in the future.

About five years ago, VDOT and the county proposed building a trail along Route 123, but the idea drew public criticism given the safety risks of having crosswalks across multiple Beltway ramps, according to Chris Wells, who manages the Fairfax County Department of Transportation’s Active Transportation Program.

Transportation officials then looked at options for building an overhead bridge across I-495 near 123, rather than immediately at the interchange. Old Meadow Road emerged as the most feasible site.

“Because of the design of the Beltway itself and the express lanes, there was only this one location that we found where we could put a bridge pier in the middle of the Beltway,” Wells said. “Otherwise, we were going to have to span the entire Beltway with a larger bridge structure, which would’ve been much more expensive.”

VDOT held a public hearing on the project in June 2018, and the design was approved in November of that year. But Lerner says the right-of-way acquisition process took over nine months to complete, since the project needed land from six different properties.

The Dolley Madison Apartments and Encore Condominiums were affected the most, with residents citing concerns about the loss of trees, the potential impact on security and privacy, and the safety of a path with no separation between cyclists and pedestrians.

“Because of all the concerns, the issues that were raised during the public hearing process, we needed to work with [residents] to make sure we did the right-of-way acquisition in a very thorough manner,” Lerner said.

The public comment process also led VDOT to incorporate lighting in its design for the planned bridge over I-495.

While VDOT has not identified a contractor yet, construction is expected to cost $8.5 million. The project’s total $13.4 million cost has been fully financed with funds from federal, state, and local sources.

Because the path is off-road, Lerner says the only significant traffic impacts will come when crews work on the bridge over the Beltway. Construction is expected to take a year, concluding in the summer of 2022.

Providence District Supervisor Dalia Palchik said in a statement that she is “delighted” that work on the shared-use path and pedestrian bridge will start this summer.

“This bridge will encourage walking and biking, save time, and reduce automobile traffic and carbon emissions,” Palchik said. “Residents won’t have to jump in their cars to drive and park at the mall, and I’m pleased that VDOT will be installing a lighted bridge. We are grateful to the Old Meadow Road neighborhood who worked with the engineering teams to transition the property and make this bridge happen.”