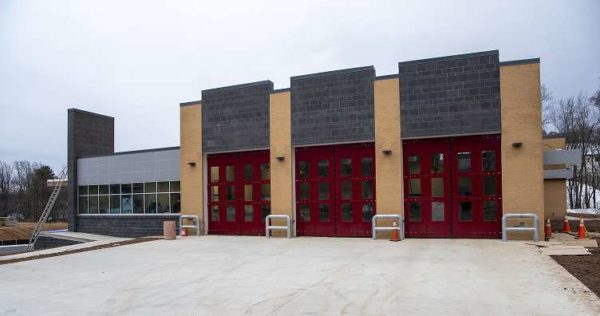 Crews broke ground on the new station in September 2019. Work was previously expected to be finished by the end of 2020, but challenges related to the COVID-19 pandemic led to some slight delays.

“There were delays but it wasn’t anything outside of what is to be expected with COVID affecting almost every aspect of the construction industry,” FCFRD Director of Public Information Ashley Hildebrandt said.

Located at 1766 Old Meadow Lane, the new Station 44 is intended to provide some relief to Station 29 (1560 Spring Hill Rd.), which also serves the Tysons area and is currently situated near the Spring Hill Metro station.

Approximately 13,852 square feet in size, the two-floor building will feature three vehicle bays, offices, living quarters for up to 12 crew members per shift, and restrooms that will be open to people utilizing nearby future athletic fields.

The McLean-based developer Cityline Partners committed to building the station and an off-site turf field as part of a proffer agreement with Fairfax County for its planned Scotts Run Station South mixed-use development. The station was designed by Samaha Associates and is being constructed by TRINITY Group Construction.

Getting closer! Construction of new Station 44, Scotts Run, is nearing final stages! Estimated occupancy is summer of 2021. New station is being built as part of a development condition to meet growing needs for emergency services in Tysons area. #FCFRD pic.twitter.com/TT9NZ8hSQ4

Station 29 is also expecting an upgrade.

Fairfax County started the process of procuring a contractor to build a replacement at 8300 Jones Branch Drive in McLean on Dec. 1. The new station will have two additional apparatus bays and improved living facilities for female workers. It will be co-located with a new bus facility at the Tysons West Park Transit Station.