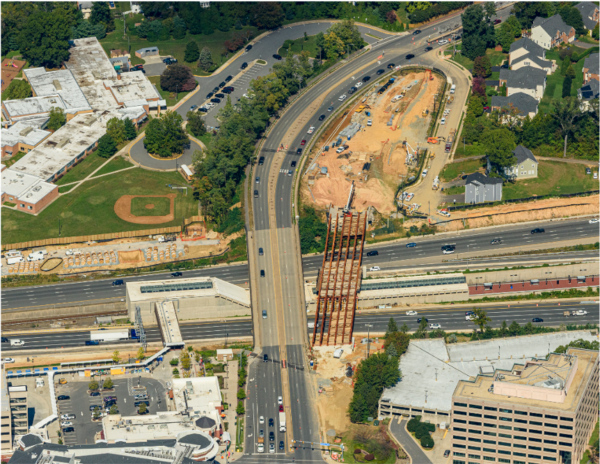 Travel on Interstate 66 will be reduced to one lane in both directions from Cedar Lane in Vienna to Route 7 every night through Saturday (Dec. 19), the Virginia Department of Transportation announced today (Thursday).

VDOT has been closing lanes on the highway between 9:30 p.m. and 5 a.m. since Dec. 14 in order to address overhead utility work for the new Gallows Road Bridge that it has been constructing, but the lane closures were originally expected to end today.

The I-66 lane closures will last from 9:30 p.m. to 9 a.m. on Friday and Saturday, with intermittent full stoppages of up to 20 minutes between midnight and 4 a.m.

The reduction of travel on Gallows Road over I-66 to one lane and the overnight closure of the ramp from the I-495 North Express Lanes to I-66 West have also been extended to Saturday.

According to VDOT, the 495 ramp closure will last from 9 p.m. to 5 a.m. every night. Traffic will be detoured to I-66 via the Route 7 exit during that time.

The Gallows Road lane closure will take place from 10 p.m. to 8 a.m. on Friday and Saturday.

“Drivers should expect delays if traveling in this area and are encouraged to use alternate routes,” VDOT said.

The state transportation agency also noted that work is dependent on the weather and may be rescheduled if inclement conditions occur.

Construction on the new Gallows Road Bridge has been ongoing throughout the year as part of VDOT’s Transform 66 Outside the Beltway project. The bridge is being reconstructed to make room for the new Express Lanes.

VDOT plans to demolish the old Gallows bridge once the new one for northbound Gallows is completed in early 2021, but according to the current project timeline, the full bridge is not expected to be complete until early 2022.