Nighttime travel on Interstate 66 might require some extra planning this week due to lane closures necessitated by construction on a new Gallows Road Bridge.

Starting tonight (Monday), I-66 East will be reduced to one travel lane approaching Gallows Road from 9:30 p.m. to 5 a.m. The Virginia Department of Transportation says that, between midnight and 4 a.m., drivers should expect periodic stoppages that could last up to 20 minutes. 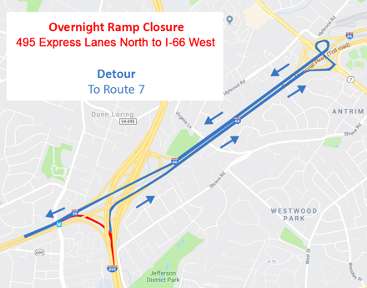 Traffic will be detoured onto I-66 East, which will lead to Route 7. Once on Leesburg Pike, vehicles will stay to the left, turn left at the traffic signal, and then follow road signs to I-66 West.

The I-495 express lanes ramp and one-lane I-66 East closures will take place every night through Dec. 3.

“Drivers should expect delays if traveling in this area and are encouraged to use alternate routes,” VDOT says.

Overnight lane closures have been a recurring sight around Gallows Road since mid-November, when VDOT started reconstructing the bridge over I-66 for its Transform 66 Outside the Beltway project, which will add express lanes along 22.5 miles of road from I-495 in Vienna to Gainesville.

According to VDOT, the bridge is being lengthened, widened, raised, and shifted east to align with the new I-66 Express Lanes while making room for future Gallows Road improvements.

The new bridge will also include a five-foot bike lane in both directions, a seven-foot-wide sidewalk on the northbound side of the road, and improved pedestrian and bicycle facilities tied to the Dunn Loring-Merrifield Metro Station.

The new bridge is being constructed in two phases with an expected completion date of early 2021.