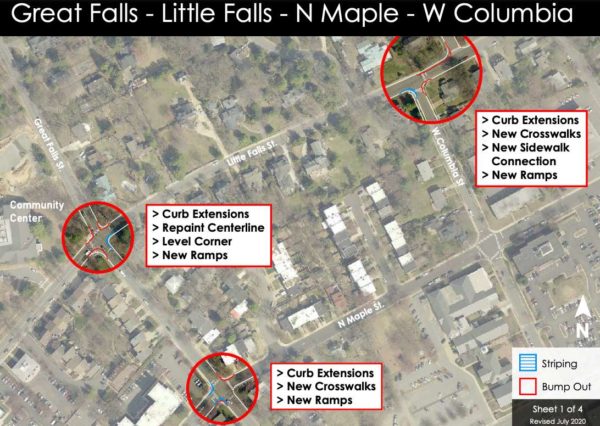 After months of delays from the COVID-19 pandemic, the City of Falls Church is starting to get back to work on implementing traffic calming measures across the city to reduce speeds.

The report included plans for new curb extensions and sidewalks along Great Falls Road, at the intersections with Little Falls Street and Maple Street — a busy set of intersections that run parallel to W. Broad Street.

An update listed eight traffic calming projects that had been underway in Falls Church, three of which have been completed. Completed projects include:

Four other projects throughout the city are underway, with Falls Church staff saying work is starting to resume on moving projects through the bureaucracy. According to a report:

Response to COVID-19 pandemic did result in a March/April slow down as we converted to remote work sites, reduced crews to emergency and priority field work, cancelled in-person community meetings pending legal authority to conduct under the emergency declaration and adapted to virtual formats. Staff adapted quickly to the virtual environment and continued to work through the queued projects in order of petitions. With Zak Bradley’s promotion to Interim Public Works Director, we have made staff reassignments to ensure that the program moves forward.

The report also included a recommendation that $350,000 dedicated to the traffic calming that had been put on hold earlier in the pandemic be released.