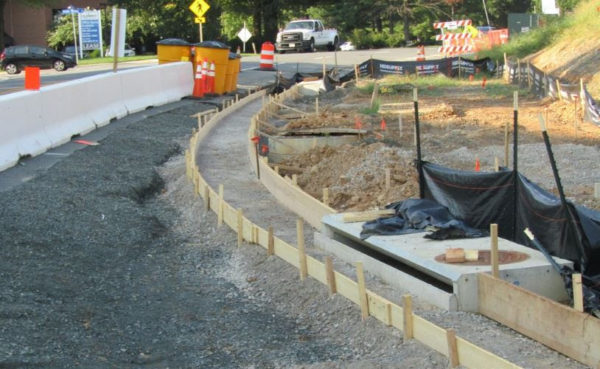 The Dulles Corridor Metrorail Project (DCMP) announced that motorists in Tysons East can expect road work on the realignment of Old Meadow Road to continue through the end of the month.

Old Meadow Road runs from Dolley Madison Blvd. at the McLean Metro station to Dolley Madison Apartments along a corridor of office complexes. The realignment aims to connect the road with Capital One Tower Drive but has experienced several delays.

The project started in the spring and was slated to be complete by the end of August, but a press release from DCMP said work will continue at least until the end of September, at which time work will begin on a new median.

“As the realignment of Old Meadow Road with Capital One Tower Drive at Dolley Madison Boulevard (Route 123), near the Capital Beltway in Tysons, continues motorists can expect to see the travel lanes shift near the end of September as work moves from the south side of Old Meadow Road to the median area.,” DCMP said in a press release.

DCMP said weather and various site conditions led to delays in the first phase of the work. The last month has had multiple severe storms and extensive flooding. Crews have since completed the new drainage infrastructure at the site and are working on new sidewalks, curbs and gutters.

The full press release is below:

As the realignment of Old Meadow Road with Capital One Tower Drive at Dolley Madison Boulevard (Route 123), near the Capital Beltway in Tysons, continues motorists can expect to see the travel lanes shift near the end of September as work moves from the south side of Old Meadow Road to the median area.

The Metropolitan Washington Airports Authority’s Silver Line project is overseeing the work, which subcontractor W.M. Schlosser is performing. The Virginia Department of Transportation and Fairfax County requested the realignment to facilitate traffic crossing Route 123 from the Capital One complex to Old Meadow Road. The change is needed because of impacts caused by Silver Line construction near McLean Station.

Weather and differing site conditions have delayed the completion of the first phase of the work, which included sidewalk and pavement demolition as well as excavation and grading, and asphalt work. Crews have completed the installation of the new drainage infrastructure and are continuing with the new sidewalk and curb and gutter work. They will finish with the asphalt and landscaping along the south side of Old Meadow Road and the east side of Dolley Madison Boulevard to complete that part of the work.

When the next phase of work begins near the end of September, crews will finish the construction of a new median on Old Meadow Road at the intersection. The work will require a southward lane shift of eastbound Old Meadow Road.

Updated at 5:30 p.m. — Georgetown Pike has been reopened, according to Fairfax Alerts. Earlier: Georgetown Pike is currently closed at Turkey Run Road in McLean after a vehicle crash from…

Fairfax County residents looking for a new Christmas tree should still be able to find an evergreen for the holiday — for now. Four Seasons Flower Market (6808 Elm Street)…

Starbucks will not reopen at the Capital One headquarters in Tysons. The coffee shop at 1610 Capital One Drive North has been closed for much of the past year during…

Employees of small businesses can receive a $500 holiday bonus from the Return to Earn Initiative, as it continues to help the unemployed transition back into the workforce.