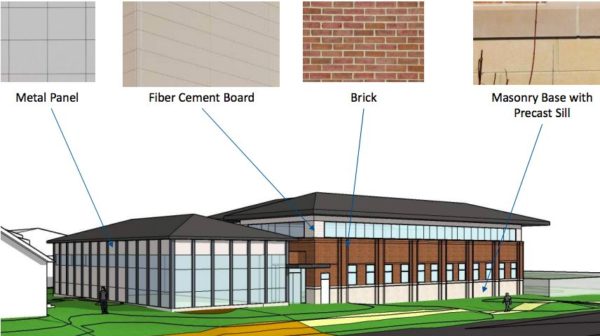 Vienna is looking for a police station befitting a town with calls like a man missing his lawnmower keys.

The town is currently in the process of reviewing designs for a new police station at 215 S. Center Street. At a May 20 work session, the Town Council reviewed designs and costs for the project.

Much of the discussion about the station involved trying to give the station a “warm” and approachable feeling — particularly with part of the project focusing on making a community space at the station.

Some of this meant a review of the types of materials used in construction, with developers favoring brick to more intimidating concrete for some of the fences and the plaza.

“It doesn’t have to be a fortress to feel safe,” a designer for the project said.

Other parts of the design process focused on the scaling of the building, which has been a contentious topic in Vienna with locals fearing new commercial projects overshadowing the town’s neighborhood feeling. Designers at the meeting said they were favoring a design that didn’t feel as “large or looming” as other options.

Lynne Coan, communications and marketing manager for the Town of Vienna, said in an email that final renderings are likely incoming over the next few months.