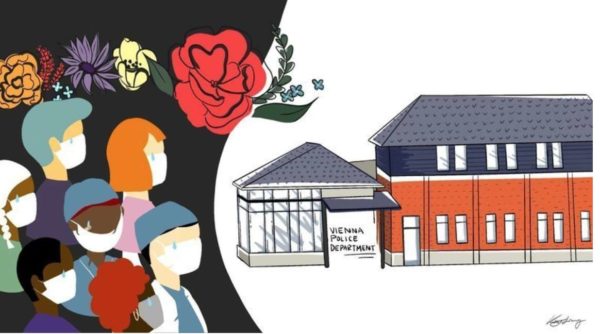 Dozens of locals created a petition to reexamine the use of Vienna’s budget to construct a new police station.

The petition, which has since gained over 1,000 signatures, calls for the Town of Vienna to halt the building construction until the Town Council arranges a “formal commission and engages in meaningful dialogue with the community to discuss  the best way forward with regard to public safety.”

“Within the first 24 hours of publishing the petition, we’ve received hundreds of signatures,” Casey Grage, one of the petition’s creators, said. “It turns out we were correct in our assumption that there is a better way to spend Vienna money.”

The police station project includes plans to create a community gathering space. It would be located at 215 Center S. Street and cost roughly $14 million.

Grage first decided to get involved with the project after she said she felt that the project wasn’t properly publicized.

“This community engagement process, beginning with community conversations and producing a formal report, is the best way to involve all Vienna residents in building a more just model for public safety,” the petition says.

Megha Karthikeyan, another person behind the petition, said that though the money from the budget must be dedicated toward town infrastructure growth, there is room for interpretation in this purpose.

“We think there are a lot of creative ways to use that money,” she said, adding other choices include a sexual assault resource center and a more welcoming community center design without a shooting range design.

“Making such a significant budgeting decision regarding community safety mandates the input of all constituents, especially that of Brown and Black people, whose insights and lived experiences must be heard by Town leadership,” the petition says.

While the organizers say the petition is a good start, both Grage and Karthikeyan said that it’s going to take other types of effort to attract the attention of the Town Council — including showing up to the virtual town hall meetings, asking difficult questions and directly expressing concern.

END_OF_DOCUMENT_TOKEN_TO_BE_REPLACED

More Stories
Poll: Are You Going to the Gym as COVID-19 Restrictions Roll Back?Women in Technology to Host Digital Job Fair for STEM Field