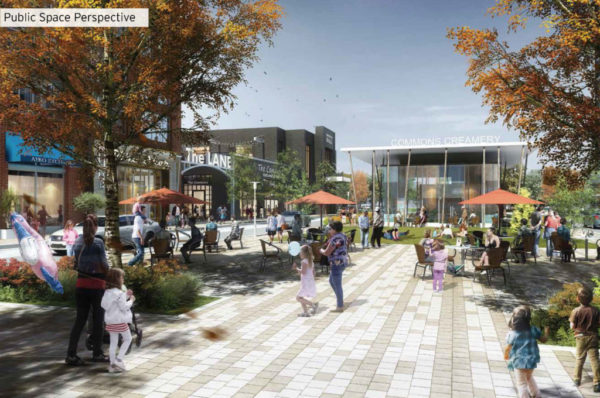 A 1.2 million-square-foot development in Falls Church has a new name as it progresses through various approval stages by City Council.

Hoffman & Associates and EYA announced that they have named the upcoming gateway development to the northwestern end of the city “West Falls.”

“The name West Falls pays homage to the site’s location within The City of Falls Church known for its vibrant community and thoughtful urban design,” a press release said.

The development will include offices, a hotel, apartments, condominiums, retail space and senior housing spanning roughly 9.5 acres. It will also include approximately 1 acre of open space for the public.

West Falls is included in a 35-acre transformation to turn the area near the West Falls Church Metro station into a gateway for the city. As part of the larger plans, George Mason High School will be relocated.

In 2019, the City Council approved an agreement for a 99-year ground lease with the developers and a Special Exception Entitlement for the first phase of the project’s entitlement.

Earlier today, Hoffman and EYA submitted their Special Exception Site Plan (SESP) to the city — the latest step in the entitlements process, according to the press release.

Construction is expected to start on West Falls in late 2021, and the first phase of the development is anticipated to open in late 2023, according to the press release.