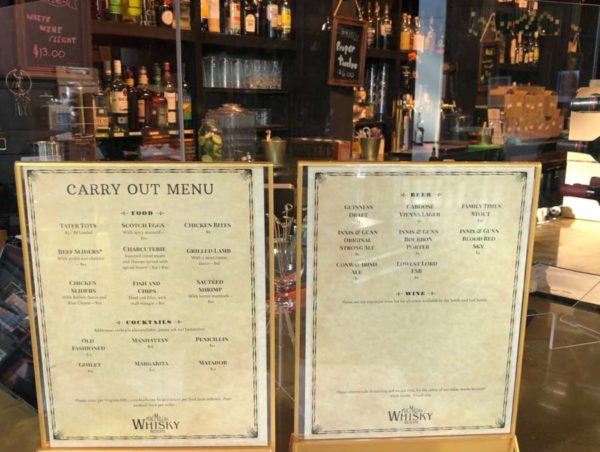 The MacMillan Whisky Room is trying to fill a void in the local dining scene: late-night food and drinks.

The Mosaic District restaurant and bar has always focused on offering options for diners hungry past 10 p.m., but staying open late now as the coronavirus pandemic continues gives the MacMillan Whisky Room an extra advantage.

“We’re open at least one to two hours later than everyone else [in the area],” Derek Anderson, who co-owns the bar along with his wife Emma Hand, told Tysons Reporter.

Currently, the restaurant is open 5-11 p.m. on Sundays and Thursdays and until midnight on Fridays and Saturdays, but Anderson said those hours might get extended once the patio seating opens this Friday (May 29).

The MacMillan Whisky Room reopened on Saturday for its one-year anniversary and to attract Memorial Day diners after being closed since March, Anderson said.

“It was kind of important to us for our one year anniversary,” Anderson said. “It was a symbolic way to come back.”

Currently, carry-out and a limited delivery service are available. The menu features small plates like tater tots and beef sliders, cocktails including gimlets and margaritas, wine, beer and “hearty fare,” which consists of steak and Guinness pie for $14.

People who order drinks will get their cocktails already mixed in 6 oz. custom bottles, which may come with garnishes on the side. “People seem to like that more than the red solo cup,” Anderson said. “We’re trying to keep it classy.”

The owners decided to not use third-party delivery services due to increased liability with alcohol deliveries, the percentages they take, along with “other issues.” Instead, they are opting to deliver to people living in the Merrifield area. “It’s going to be where we can walk,” he said.

The reopening is helping them prepare for when Northern Virginia starts to ease business restrictions.

“We’ve already set up our outdoor seating area,” he said, noting that the tables are spaced 6 feet apart.

Anderson is hoping that diners “don’t want to storm the patio.”

“If they come back too quickly, it will come back to an increase in cases,” he said, adding that he wants customers to know that restaurant staff — at his place and others — “are facing health threats from these big crowds.”

Now that he’s received a Paycheck Protection Program loan during the second round in early May, he expects that they will slowly rehire more staff. So far, they have brought back six of the 25 people who worked there in pre-COVID times.

“That was the hardest part of all of this,” he said about letting all of the employees go when the restaurant closed. Currently, they are prioritizing rehiring people who haven’t found new jobs, left the area or aren’t receiving unemployment benefits.

“With the nature of our carry-out business now, we’re not having as many bartenders,” he said.

Since the PPP loan is primarily meant to pay employees, Anderson said that the Small Business Administration loan they got “is what is really allowing us to ride out the delays.”

As long as everyone stays safe, Anderson is hopeful that the business will bounce back.

“We think we’re going to ride this out pretty well,” he said.