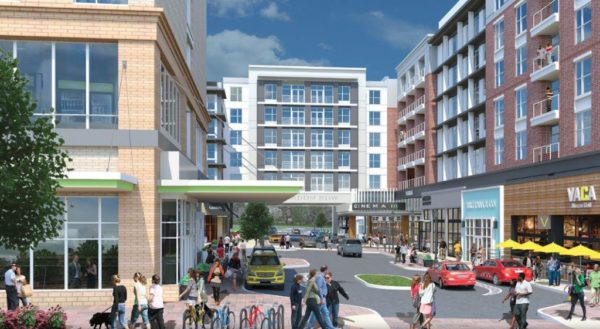 The Studio Movie Grill at Founders Row in Falls Church will likely become more colorful with the installation of a new mural project.

Proposed themes include a collage of the universe, diverse individuals and storytelling images like film, according to the city documents, which added the dimensions will be roughly 128 by 38 feet.

“Rooted in the inclusive spirit of the community and history of Falls Church, the design’s whimsical vignettes illustrate the process of artistic ideation, creation, and interaction,” the city documents said about the art.

The mixed-use development, which is currently under construction at the corner of W. Broad and N. West streets, will include luxury apartments, retail space, the 4,693-square-foot movie theater and a 9,476-square-foot City Works Eatery and Pour House.

Though in the early stages, the proposed mural is tentatively scheduled to come back to the Planning Commission for a public hearing in June.

It is unclear when the mural will be completed.

Rendering via JBG Smith, images (2) via City of Falls Church