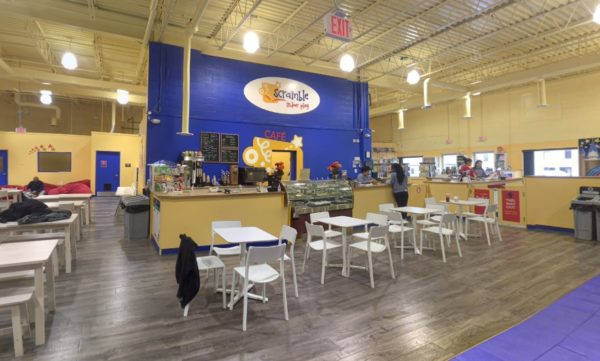 A developer wants a proposed retail building in Falls Church to house a kids’ play center.

Bob Young, the developer, told the Falls Church Planning Commission Monday night that Scramble, a self-described “European-style play center” in Alexandria, would be a tenant.

“It’s what I would call a high-end, indoor children’s playground,” he said. “It will have a cafe. It will have an area for parents to work on their computers.”

Fairfax One LLC wants to redevelop the lot, which is across from the Protestant Episcopal Church and currently being used as a surface parking lot for the church, under a land lease agreement with the church, according to city documents.

Called Southgate II, the development would add a 12,000-square-foot retail building at 130 E. Fairfax Street. (Southgate I is at 116 E. Jefferson Street.)

The project includes solar panels on the roof, which would provide roughly 25-30% of the electricity use, Young said.

Discussion of the proposed building and kids’ play center was mostly limited to comments from a handful of commissioners.

Vice-Chair Brent Krasner was the most vocal with his concerns, calling building a “very suburban, strip mall feel.”

Krasner also questioned if Scramble would be the best tenant, saying that the kids’ center seems to be better suited to “industrial” areas.

“I’m not saying there’s no use for it here,” Krasner said, adding that he doesn’t know if the space would “translate” well to a future tenant if Scramble were to close.

In response to Kranser’s comments, Young said that the building is “probably a step in the right direction,” emphasizing that the “filthy parking lot” could add tax revenue to the city as a commercial building.

“There’s good and then there’s best,” Krasner quipped back.

Not all of the feedback from the commissioners focused on concerns. Commissioner Cory Weiss, who described herself as a “semi-young mother,” called the building “a great opportunity.”

When Weiss asked the developer if the project could be more pedestrian-friendly, Young said that constraints on the site, like being “dense with underground utilities,” would make that difficult.

“We have a lot of constraints that are put on us by the church itself,” Young said. “We had to work through a lot of issues with the church.”

A public hearing is tentatively scheduled for March 2, according to the documents.