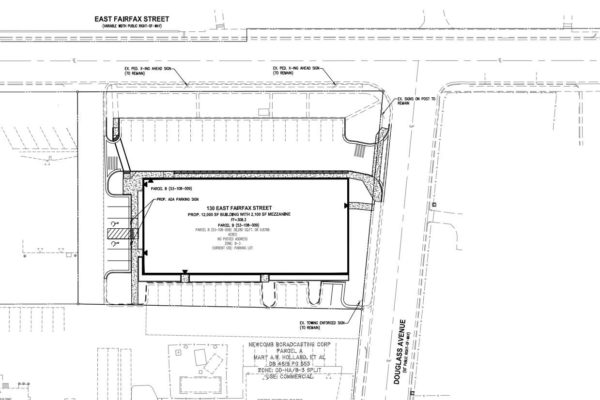 Falls Church officials are set to review a proposed retail building directly across from the Protestant Episcopal Church.

Fairfax One LLC wants to redevelop the lot for a future commercial tenant under a land lease agreement with the church, according to city documents.

More from the documents:

The proposed height for the new building is approximately 28.5 Feet, and appears to be one and half stories with the mezzanine level. The adjacent property at 116 East Jefferson known as Southgate I was renovated under a building permit application in 2016, also by Fairfax One LLC under a similar lease agreement.

The current development on this property contains a commercial building with several retail and service tenants and surface parking.

The developer is proposing to add a curb cut on Douglass Avenue near E. Fairfax Street and new access to the alley that connects to Fairfax Street.

The Falls Church Planning Commission is scheduled to review the application during a work session on Monday (Feb. 3).

A public hearing is tentatively scheduled for March 2, according to the documents.

Image via City of Falls Church; map via Google Maps