Local officials are set to talk about how to improve safety along Shreve Road at a town hall on Thursday. 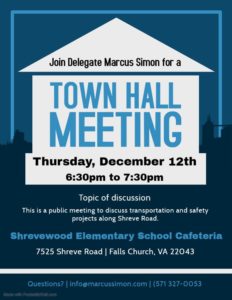 The event comes several months after a Falls Church resident Betty Ana Bernstein-Zabza died from a hit and run near the intersection of Shreve Road and Hickory Street in August.

Del. Marcus Simon (D-53rd) and the Shreve Road Community Working Group, a coalition of residents and community associations advocating for improvements to the corridor, plan to provide an update “on actions by local officials to improve the notoriously dangerous Shreve Road,” according to an email from the working group’s co-founders.

The town hall is set to start at 6:30 p.m. at the cafeteria in Shrevewood Elementary School (7525 Shreve Road).