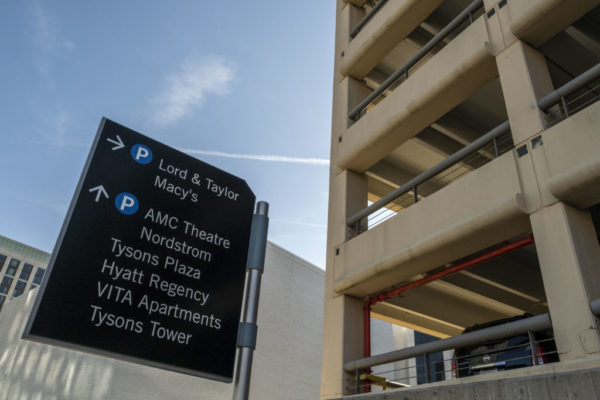 The proposal would affect the four largest malls in Fairfax County — the two in Tysons, Fair Oaks Mall and Springfield Town Center — and was based on a review of the parking rates and demand at large regional malls by consulting firm Nelson/Nygaard.

County documents indicate that the proposal is meant to help Fair Oaks Mall.

“Fair Oaks Mall is also currently looking at redevelopment opportunities and an evaluation of the parking rates is viewed as critical to ensure the long-term vitality of the mall,” according to a county staff report.

Yet most of the discussion about the proposal last night focused on the inclusion of the two malls in Tysons — Tysons Galleria and Tysons Corner Center.

Dwight Fuller, a managing partner with Great American Restaurants, told the Planning Commission that parking is a problem for staff and diners in the Tysons area.

“It’s hard to do this one size fits all,” Vice-Chairman James Hart said, asking if there could be a way to eliminate the other malls from the proposal. “Is there a way to do this for the mall that seems to need this?”

Zoning Administrator Leslie Johnson told Hart that the staff could have tried to define the proposal in a way that would only make it applicable to Fair Oaks Mall.

Tysons Malls Have Flexibility With Parking

Despite concern about parking at the Tysons malls, county staff told the Planning Commission multiple times throughout the evening that the Tysons malls “have additional flexibility” already when it comes to parking.

During the discussion between the staff and commissioners, it was unclear how much of the conversation revolved around both Tysons malls or just Tysons Corner Center. Yet the feedback from staff suggested that both Tysons malls already have the opportunities to pursue reducing their parking limits if so desired.

“[The proposal] does not have a lot of relevance to the Tysons malls because they can go to zero [parking spaces,]” staff said. Yet, for economic business decisions, the malls are unlikely to drastically cut or eliminate parking, staff said.

Tysons Corner Center also proffered to pursue parking reductions with the redevelopment of part of the site, staff said.

When asked by the commissioners if the proposal would serve as a catalyst for the Tysons malls to cut their parking, the staff said, “No, it would not.”

A Call For More Data

The proposal is based on a Nelson/Nygaard study that evaluated parking data for Fair Oaks Mall collected by the property owner in December 2017 and December 2018, along with data about the Springfield Town Center that the firm collected in June.

The firm found that less than 65% of the available spaces were occupied during peak times from a parking count for the Springfield mall and analyzing data from the Fair Oaks Mall. The study did not evaluate the two malls in Tysons.

County staff insisted that the study looked at the peak shopping month — December.

Commissioner Ellen Hurley, who represents the Braddock District, criticized the limited range of the Nelson/Nygaard study and that there isn’t any data about the parking demand for the day after Thanksgiving.

“I think it’s disingenuous to say the ‘peak day of the peak month’ when most shoppers realize the peak day is the day after Thanksgiving,” she said.

Hurley called for a survey of mall shoppers to provide more data about the parking demand. She also noted that not everyone has access to the Metro.

“It’s kind of feeling like you’re saying that Tysons could eliminate all parking,” she said. “From the lens of equity that doesn’t seem like a really smart way to go.”

Carter suggested a table with the parking rates for 10 or so malls in Fairfax County and surrounding jurisdictions.

“I don’t question that malls are evolving tremendously,” he said.

Tony Calabrese, a DLA Piper attorney representing Fair Oaks Mall, said that the proposal was “intended to be relatively simple and straightforward.”

Addressing Hart’s comments, Calabrese said that trying to make changes to the proposed amendment might lead to more confusion.

Calabrese said that Fair Oaks Mall does survey its shoppers and claimed that the day after Thanksgiving is not nearly as the holiday peak in December.

Calabrese noted that the amendment would not affect the Tysons malls from being able to reduce their parking if they wanted to — the Tysons Galleria, while not a part of the PTC currently, could opt-in with the zoning administrator’s approval, staff said.

“The parking requirements have to be dropped,” Calabrese said.

The Planning Commission voted to defer the decision to next Wednesday, Nov. 20.

At-Large Commissioner Timothy Sargeant said that deferral will give the commissioners time to consider the comments from the public hearing.

Commissioner Phillip Niedzielski-Eichner, who represents the Providence District, asked the staff if they could exclude the Tysons malls. Staff replied that the proposal would barely impact the malls, which already could find ways to reduce their parking requirements.

While Niedzielski-Eichner said he would prefer to see the Tysons malls kept out of the proposal, he said he is “supportive but with reluct-ness.”

Ultimately, he said that he wants to help Fair Oaks Mall and doesn’t want to risk having to over through the process again if this proposal is rejected.

The proposal is slated to head to the Board of Supervisors for a hearing on Dec. 3.