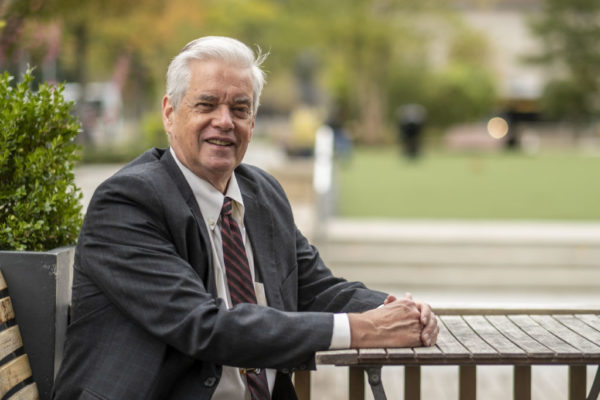 Editor’s Note — Tysons Reporter is running Q&As with the candidates running for the Dranesville and Providence District seats on the Fairfax County Board of Supervisors this week. The stories have been condensed and edited for clarity.

Featured here is Republican Eric Anthony Jones, who is running against Democrat Dalia Palchik for the Providence District Board of Supervisors seat, which represents Tysons, Merrifield, Oakton and parts of Falls Church.

After the previous Republican candidate for the Providence Supervisor seat died, Eric Anthony Jones decided to run to give voters a stark choice between him and his competitor, Dalia Palchik.

He previously served as a foreign service officer for the U.S. Department of State, with a focus on cybersecurity and energy policy, according to his website. His work took him around the world, letting him live in India, China, Russia, Bulgaria and Afghanistan.

Jones said at a recent candidate debate that he does not believe in sanctuary cities because they harm immigrants who became citizens or legal permanent residents through governmental processes. During his time as a U.S. Consular Officer in China, he interviewed more than 20,000 people and approved half of them to come to the United Staes, he told Tysons Reporter.

Jones also formerly taught as a college professor and now has two daughters in college and a son in high-school. If elected, Jones said education will be one of his top priorities.

Now retired, Jones has lived in Fairfax County for the last 27 years. Earlier this month, he jumped into the race for the Providence District seat and faces Democrat Dalia Palchik in the general election next week. (Current Supervisor Linda Smyth is retiring.)

Tysons Reporter met up with Jones to learn more about how he would want to improve capacity issues at schools and manage the county’s budget, along with other topics, if elected.

Tysons Reporter: How do you plan on tackling affordable housing in Fairfax County?

Jones: I am in favor of affordable housing. I’m in favor of market-based but non-subsidized measures for housing. One of the things we have to face is that we live in Fairfax County, 400 square miles, 1.1 million people, 3,000 people per square mile. The fact of the matter, the reality is that the land here, the ground is very expensive.

I’m not for subsidized housing here, using tax money for that. I do believe, for example, that if there is an impoverished family of four that it’s better given a certain amount of money to help them in terms of welfare for the truly needy. I think it is better to — with the given amount of money — to be able to support three families instead of one family. That’s done by living in areas that are not so expensive.

What’s happening is that a lot of areas are getting new buildup, such as here in Mosaic, there was basically an open, unused lot or areas where they had large older styles malls. Those can be transformed into units.

I think a creative way mentioned by several people is that there are many elderly residents that are living in the houses where their children grew up in. Elderly residents are a large population who want to stay in Fairfax County. They have relatively large houses and I think the county can help facilitate ways in which elderly people with room in their houses can work out rentals. Elderly people can find reliable renters that they feel safe with. They want someone around, someone to call in case they fall on the floor.

TR: The county is currently looking at adding a new school to Tysons. Is that enough to address capacity issues? What should be done for all the incoming students?

Jones: We have to look at the facts of increased population and demand for schools. I am for expanded school facilities. Overcrowding has resulted in a lot of trailers.

I’m fully in support of salaries and benefits, expansions for teachers and also supporting teachers in terms of discipline regulation that are favorable to teachers, students and maintaining a proper learning atmosphere.

In addition, I believe we should look at charter schools, which offer students and parents a choice. Charter schools are not an attack on teachers or anything like that. I see it as a creative way of giving parents and students public choice while also helping to relieve the burden of overcrowding.

I support teachers and their potential to attract and maintain quality. I think we need to address the issues of pensions.

Pensions are a ticking time bomb anywhere. Expanded school facilities of both existing schools and new school construction to help alleviate overcrowding. I want to reduce the use of trailers and the solution to that is more school construction.

TR: What are your top three priorities when it comes to transportation?

Jones: One is the expansion and improvement of roads, large and small. There is a certain reality we bump up against that the terrain is such in a lot of these places that you can’t expand the roads, you’d wipe out a lot of, not just the trees, but the way the terrain goes.

We have these watersheds, we have these beautiful parks as a result and deer in an urban setting. We need to protect those. It’s a constraint on how we can expand our roads.

Number two is providing expansions for public transportation, reliable public transportation so people can get to work and back. The density of the area helps us there because it means you don’t have to worry about going as long of a distance and connectors for people go farther out.

I think there is some potential for expansion, for example, working with Maryland and Virginia, to figure out the modern era. We need to have another way of crossing the Potomac [River]. That will relieve a lot of the congestion you get.

TR: What are your top three plans to tackle climate change?

Jones: There is a stark choice between me, Dalia Palchik and the current Board of Supervisors. I am for energy policy here. It should be consumer-oriented, based on cost-benefit analysis and be affordable energy, reliable energy and clean energy.

I see the Green New Deal policies as unrealistic, coercive [and] expensive. Those proposals would be job-killing, net-job killing and bet against economic prosperity.

I have a fundamentally different way of looking at it.  There is not a good analysis and convincing evidence of how much role is being played by natural forces and fluctuations and the factor of CO2 concentration increases as a result of fossil fuels.

I’m against the Green New Deal and the fundamental things behind it. People should realize electricity does not start with a wall socket.

TR: How will you manage the budget?

Jones: The budget is $8 million per year. The budget itself needs continued scrutiny. I think we should have more competitive bidding and more transparency. It’s important to keep our budget under control.

On the flip side, I think its priorities should go especially to the school system and teachers and maintaining and improving the quality of education.