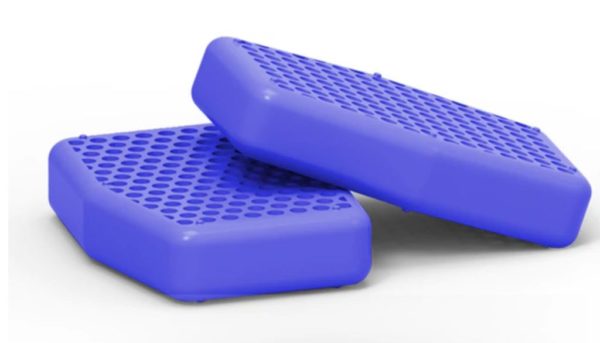 After a Tysons entrepreneur set out to rethink the soap industry, he ended up attracting the attention of thousands of Kickstarter backers for a new product.

Sud Stud is a cover for a bar soap that supposedly conserves soap and acts as a loofah while also being more hygienic than other products, Dale Lin, the products creator and CEO of Silli.Co, told Tysons Reporter.

Within the first fundraising period on Kickstarter, Lin managed to raise more than $57,000 in 36 days from supporters internationally.

“As an alternative to the notoriously filthy loofahs we all use, Sud Stud’s innovative design uses less soap and creates a frothier lather for a deeper clean while also eliminating bacteria build-up while awaiting its next use,” Lin said.

His product is designed to fit any type of soap bar no matter the shape. Users can simply wet the bar and slip it into the silicone sleeve, according to the website. When it comes to cleaning, users can either microwave it or stick it in boiling water.

He began developing the product about a year ago and launched his funding campaign in June.

Lin said runs the company Silli.Co, under which he created Sud Stud, by himself, with occasional packing assistance from his mom. He works in e-commerce full time and is developing the company on the side.

While he said he named the company Silli.Co because he liked the play on words with “silicon company,” he doesn’t put too much effort into product names. He chose the name “Sud Stud” because it was “straight to the point” and summarizes the product well.

Though this isn’t Lin’s first successful Kickstarter campaign, he was surprised how quickly people picked up on his idea. (In the past, he also ran a Kickstarter for specialized fidget spinners, which are still for sale on Amazon.)

“My goal is to develop fun and unique products that solve problems, big or small,” Lin said.

One of his largest challenges so far has been knock-off products that people are trying to sell online. Kickstarter has a policy where entrepreneurs must put almost exact plans and dimensions for the project, which Lin says puts innovators at a disadvantage.

Now, Lin is preparing to ship the product out to customers in December.

After the initial round of Sud Studs gets sent out, Lin told Tysons Reporter that he wants to expand Silli.Co, along with his product line with silicon pillows and a soap brand.