Falls Church and Vienna residents are concerned that proposed changes to urbanize Fairview Park will worsen traffic and put on a strain on overcrowded schools.

Fairfax County is currently considering altering the Merrifield Suburban Center to turn an office park engulfed by I-495, Lee Hwy and Route 50 into a mixed-use development with more office space, multi-family homes, a hotel, retail and recreational uses.

Fairview Park is currently home to offices — including the four-story-tall HIIT Contracting building — and residential communities by a lake.

County staff said in a report that mixed-use developments are more attractive to employees than single-use office parks. Additionally, the plan amendment would encourage developers to include affordable housing dwelling units or workforce dwelling units, along with senior living and student housing options.

Elizabeth Baker, a senior land use planner for Walsh, Colucci, Lubeley & Walsh, told the Planning Commission that the fact that three of the eight previously planned office buildings have been built points to office parks being out an outdated concept. The offices at Fairview Park had a 29% vacancy rate last year, she said.

At the Fairfax County Planning Commission’s public hearing last night (Wednesday), residents urged the commissioners to scale back the number of housing units proposed for the area and speed up pedestrian and biking improvements, like a pedestrian bridge over Route 50 (Arlington Blvd).

While several residents who testified said they don’t want to see a new building along the man-made peninsula, county staff said that they have language in the plan amendment that would discourage that. If a developer decided to build there, they would be prevented from creating a mixed-use development.

Charlie Hall, who was on the task force that helped evaluate the proposed changes, told the commissioners that schools, park and transportation in the area “are under strain.”

While Hall noted that the Planning Commission is probably eager to repeat the “spectacular” Mosaic District, they are “in danger of choking on its success.”

Hall — and several other people — pointed to New Providence and Yancey drives at Fairview Park Drive as a “unique situation” that would require road work to make it safer — especially if thousands of more people eventually come to the area. 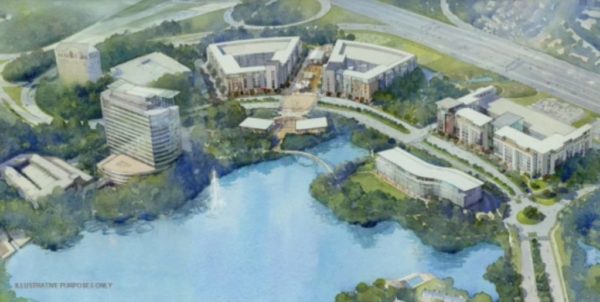 The plan currently proposes up to 1,060 dwelling units. Several of the residents who testified said that they prefer scaling back the number of units to 840.

Hall said that he thinks 840 housing units are “economically viable and will create an attractive community.”

Baker, the land use planner, argued that the extra units could help the housing shortage in the area. “We really do feel the need for the 1,060 [units],” she said.

Several residents also raised concerns about the anticipated 119 students the changes could add to the area, saying that nearby schools — like Falls Church High School — are over capacity.

Magaret Irish, representing the homeowners’ association for Carr at New Providence, said that plan amendment would be “the end of quiet evenings in our neighborhood,” in addition to threatening wildlife and trees in the area.

“When does more become enough?” she asked the commissioners. “We need less traffic. We need better infrastructure… We need schools, not wide roads.”

Kevin Warhurst, a McLean resident and member of the Greater Merrifield Business Association said that — while he is sympathetic to residents’ concerns — the changes “will allow [Fairview Park] to grow and thrive.”

“Having a mixed-use is important,” he said.

Phillip Niedzielski-Eichner, the commissioner for the Providence District, asked the commission to delay the vote on the plan amendment until next Thursday (Sept. 19) to give the Planning Commission time to review the public comments.

The proposal is set to head to the Board of Supervisors for a hearing on Tuesday, Sept. 24.