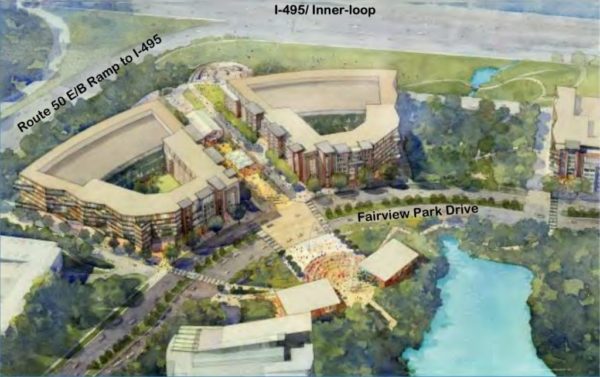 As Merrifield and Falls Church continue to urbanize, an office park east of I-495 may get transformed into a mixed-use development.

Last July, the Fairfax County Board of Supervisors OK’d considering changes to parts of the Merrifield Suburban Center, which aims for two high-density, “core areas” located between I-66 and Woodburn Road.

Merrifield has already seen some major transformations — from developments like Halstead Square and Avenir Place to the new commercial area known as the Mosaic District.

Now, a proposed change to the plan would have an area surrounded by I-495, Lee Hwy and Route 50 become “an amenity-rich office park and mixed-use neighborhood.”

Directly to the east of I-495, Fairview Park currently has offices — including the four-story-tall HIIT Contracting building — by a lake and residential communities. A tributary of Holmes Run runs along the southern edge of the area.

Northrop Grumman Federal Credit Union and the 2941 restaurant are nearby.

“The justification for the nomination states that the existing single-use office park model that was successful in the 1980s is no longer competitive with mixed-use work environments that provide retail and service amenities, as well as the opportunity to live near work,” according to a staff report on the proposed amendment.

More from the staff report:

The most intense activity area would be located just north of Route 50 and would include an outdoor plaza, and residential uses with first floor retail uses. At either end of the plaza, the concept would provide for social and cultural amenities such as waterfront recreation, an amphitheater, free-standing retail pavilions, and an indoor community space. Midrise residential buildings with first floor retail uses would frame the plaza and infill elsewhere in the sub-unit.

An enhanced network of sidewalks and trails with a more suburban, naturalistic streetscape appearance would link the existing and new development and the natural areas of the office park, including the Holmes Run tributary and the shore of Fairview Lake.

On the east side of Fairview Park Drive, the nomination proposed to develop a residential building on a man-made peninsula in order to capitalize on the natural setting and the proximity of the lake.

The staff report notes that demand for office space has declined as options like teleworking become more popular and that workers want access to public transit and shopping and dining options.

The proposed amendment to the Merrifield Suburban Center plan would also alter an area catty-corner to Fairview Park near the Inova Fairfax Hospital.

Both areas would incorporate residential uses. The staff report recommends that the plans for those areas include affordable dwelling units or workforce dwelling units to add to the county’s Housing Trust Fund and “create an inclusive community”, along with senior living options and housing for college students.

The Fairfax County Planning Commission is scheduled to hold a public hearing on the proposed changes today (Sept. 11) before they head to the Board of Supervisors for a hearing on Tuesday, Sept. 24.