Falls Church city officials have mixed reactions to a proposal that would allow for more downtown development in exchange for protection of certain properties.

City staffers have identified a lack of park and open space, financial pressures to redevelop historic structures and a need for flood prevention as some of the challenges the city faces it pursues its 2024 vision. To address those issues, staffers want the City Council to consider a new program.

The Transfer of Development Rights (TDR) program would let development rights get shifted from one area to another in the city. It consists of three components:

According to the draft proposal:

A Transfer for Development Rights (TDR) program is one possible tool to preserve and increase green space, protect sensitive areas such as floodplains, and preserve historic structures. TDR can also help to diversify the City’s housing stock by creating a tool to facilitate the provision of missing middle housing which is critical to supporting a growing community.

As for the receiving zone, developers would be able to build townhomes or small condo buildings, based on a variety of factors, according to the proposal. 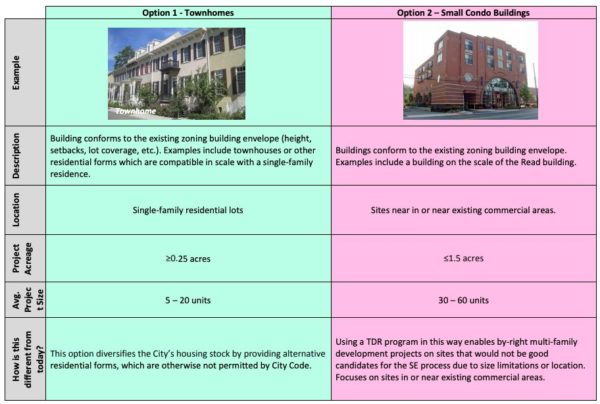 The program received mixed reviews from councilmembers during a work session on Tuesday (Sept. 3).

Councilmember Ross Litkenhous noted that if owners of properties along the floodplain sell off the development rights, they would be selling off the value of the future property — possibly leading to home deterioration.

City staff said that the city would purchase — possibly granting a life estate to the current owners — floodplain properties and then tear down homes on those properties once the residents move out.

“I want to know what are we going to face if we go forward,” he said. “I’m not negative toward the concept, but I’m trying to get a fuller understanding.”

While Snyder said he wants to be supportive of the proposal, he said he doesn’t think the proposal should be on “a fast track right now.” “Are we simply transferring dense development from one place to another?” he questioned.

“I hate to say this, but I have some serious reservations about this plan and I think it has limited applicability,” Tarter said.

Tarter said that if the program is by-right — meaning it wouldn’t go through the special exception process — “unintended consequences” could result.

Tarter pointed to Arlington County, saying that TDRs have to go through the special exception process and that the county retains control of the receiving and sending sites.

“As it’s proposed tonight, as I understand it, there would be limited supervision of the transfer [by the city],” Tarter said, adding that he’s confused about how the transfers would work.

Tarter added that he does want to see the city find cost-efficient ways to buy up floodplain property.

The proposal heads to the work session for the city’s Economic Development Authority on Oct. 1.