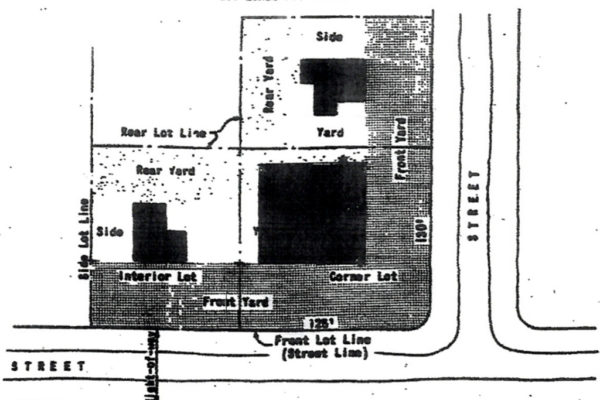 The McLean Citizens Association would like a little more space between neighbors on corner lots.

Currently, homes built on corner lots fall under a special set of zoning parameters. While the zoning law says the home must be at least 25 feet from the front and side streets, homes can be built with as little as 12 feet between them and rear lots — though some in the MCA said there are lots with as little as 8 feet of distance.

The result are tiny back yards on homes built at an angle and very little space between the corner lot and their catty-corner neighbor.

In a resolution approved on Wednesday (Sept. 4), MCA calls for Fairfax County to change the regulations so the setback is at least 18 feet if at an angle or 25 feet if set squarely.

“In recent years redevelopers have increasingly been targeting corner lots in order to take advantage of Fairfax County’s unusual corner-lot rear setback requirement… by placing large houses with square footprints squarely onto corner lots, with only a rump ‘rear yard,'” the resolution said.

It’s a problem county staff are aware of and have been making efforts to amend. As part of Fairfax County’s efforts to modernize its zoning regulations — called zMOD — the county has a section specifically about corner lot setbacks:

“Staff has received comments about this setback provision, noting that the additional lot width required for a corner lot as compared to an interior lot more than off-sets the additional front setback requirement,” staff said in the document. “The attached draft now requires that a 25-foot rear setback be provided.”

The MCA resolution also includes information about technical changes requested, like adjusting where the “front lot line” is located for the corner lots. But the resolution also encouraged Fairfax County to act more swiftly on the issue than the framework of the zMOD ordinance would indicate.

“County staff are aiming for public hearings in spring or summer of 2020 on the new Zoning Ordinance arising from zMOD, and effectiveness of the new ordinance is expected to follow enactment by an interval of some months,” the resolution said. “The MCA urges Fairfax County to enact and implement such reform by the end of the first quarter of 2020.”