Some attendees at a meeting about a multi-year road project that recently kicked off in the Vienna area said they are worried about traffic impacts.

The Virginia Department of Transportation (VDOT) is currently working on its Transform 66 project, which includes construction near the Vienna/Fairfax-GMU Metro station.

Rich Clifton, the project’s design engineer from FAM Consulting LLC, provided attendees with a construction update at a meeting yesterday (Sept. 4) at the Providence Community Center. Every seat was filled for the presentation at 7 p.m., with dozens of people standing in the back.

Starting today (Sept. 5), the ramp from Saintsbury Drive to eastbound I-66 will be permanently closed. 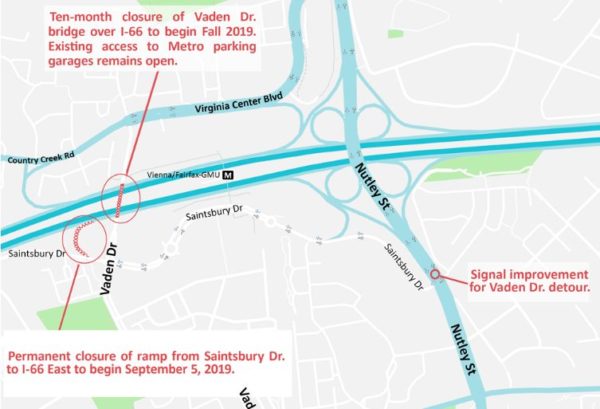 The ramp will temporarily reopen for buses during the weekday from October 2019 to September 2020 while another road construction project is underway. Clifton strongly urged non-bus drivers to stay off of the ramp.

“The ramp can’t handle the volume of traffic if it was open to the general public,” Clifton. “There are 19 bus routes that go over Vaden.”

Along I-66, the barrier between the collector-distributor (CD) road and eastbound I-66 will be removed and access to I-66 from the CD road and Nutley Street will shift east of Vaden Drive.

On westbound I-66, the lanes will shift, along with the CD road. Clifton said that the exit ramp to Country Creek Drive will remain open.

Starting in October, the bridge at Vaden Drive will close for demolition and construction of a new bridge — a process that will take about a year, Clifton said.

“We’ll try to stay out of Nutley while we work on Vaden bridge,” Clifton said.

While the bridge is closed, drivers will have 2-mile-long detours to follow. A modification of traffic flow at the Nutley Street intersection and Saintsbury Drive will accommodate the detour, Clifton said.

Some attendees at the meeting said that they expect drivers to head west instead of following the detour, possibly clogging up local roads. Clifton said that posted signs about the detours are meant to encourage drivers to take detour routes, but that there is no guarantee that drivers won’t come up with their own directions.

For pedestrians, a shorter detour will allow them to use the bridge at the Vienna/Fairfax-GMU Metro station, which will stay open all day and night. Clifton said that the Washington Metropolitan Area Transit Authority (WMATA) will be able to close off the station, while keeping the gates open for the bridge.

In about six months, work will start on Chain Bridge Road (Route 123) to relocate utilities and to construct bridges, ramps and new box culverts for a future path.

A temporary traffic pattern change will allow for the construction of new ramps:

There will also be four new traffic signals in that area. 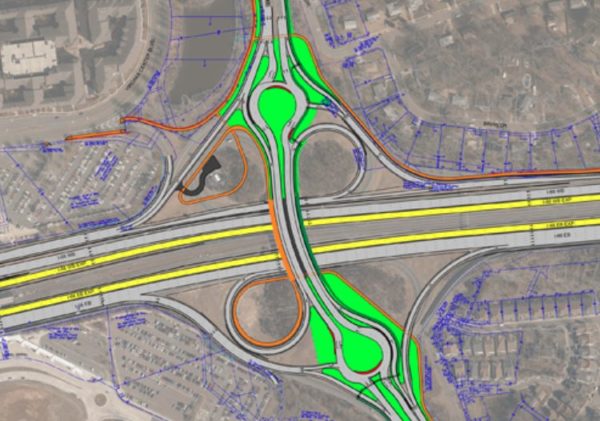 Once all of that work is finished, construction will start on the Nutley Street and I-66 interchange.

While a diverging diamond design was proposed a few years ago, Clifton said that the interchange will instead have a double roundabout.

That work is slated to finish up in the early part of 2022.

After several questions about traffic for each portion of the project, Clifton told attendees to check out the traffic impacts online.