A local sci-fi author recently teamed up with big names to expand his fictional world.

David McGoings is the creator of “Catharsis: 2066” and a Falls Church resident. He began the project as a book trilogy but decided to expand it into a multi-media project featuring Star Trek’s Robert Picardo and famous narrator Greg Tremblay.

“Catharsis: 2066” follows the lives of six characters interacting with aliens come to earth and change the world’s history forever. The storyline explores the characters’ feelings and struggles as they deal with a changing environment and the ripple effect of their actions.

“It’s about the breakdown of society and the interactions of the people,” McGoings said.

McGoings told Tysons Reporter that the first book is currently finished and is in the process of publication. Next, he wants to implement a video series and work on the last two books in the trilogy.

He isn’t sure when the first book will be released to the public. As a teaser, Tremblay and Picardo from “Star Trek: Voyager” agreed to narrate the first four chapters. There is also a trailer with artwork from Rob Joseph.

“It started out as just a pitch, but most people in the industry when putting their name on something or helping out with something, they have to like the product first,” said McGoings. 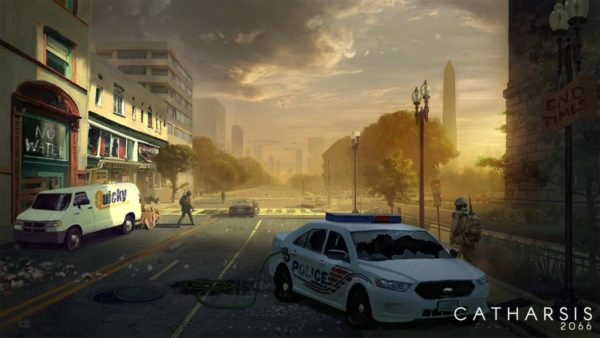 Within the first week of the narration’s release, he said he received more than 2,000 new social media followers and attention on several online forums encouraging art from people of color, including Planet Ebjon, a Facebook page dedicated to Marvel DC characters and the Entertainment Universe.

“It has motivated me as well as pushed the envelope a little on how far you can go when writing a book if you have the tenacity or drive to keep with it,” McGoings said.

Until this point, McGoings said all the proceeds for his book have come out of his pocket or from donations from friends and family. In hopes of reaching his $8,000 goal for the trilogy and a YouTube video series, McGoings started a GoFundMe where people can donate to support the project.

In the next few weeks, McGoings and Joseph will sponsor a social media contest for fans where people will have the change to enter for a piece of signed custom artwork. Fans can check out the book’s Facebook page for upcoming details.

Eventually, McGoings said he wants to write full-time and hire a literary agent, to help him market his books to publishers.

“It’s probably one of the hardest parts of the process, besides writing the book itself, is to find an agent,” McGoings said. “It’s hard to grab the attention of somebody.”