Updated at 5 p.m. on 9/4/19 — Power was restored at 1:27 a.m. this morning (Wednesday). “The outage was caused when a third-party, non-Dominion contractor cut into one of our energized cables,” a Dominion Energy spokesperson said.

Updated at 5:15 p.m. — Battalion Chief Steve McFarland told Tysons Reporter that said that the three workers were injured while installing a conduit box and that the power outage resulted because of the incident.

Updated at 4 p.m. — Three people were injured in an electrical incident at a job site in the 8200 block of Greensboro Drive, Fairfax County Fire and Rescue tweeted.

One person was transported by the Fairfax County Police Department’s helicopter to a local burn center, while the other two people were driven to a local hospital.

Sgt. Greg Bedor, a police spokesperson, told Tysons Reporter that the police department received the call about the incident at 3:30 p.m.

Units are on scene in the 8200 block of Greensboro Drive with three patients who were electrocuted. One transported by @FairfaxCountyPD Helicopter to local burn center. Two transported by ground to area hospital. #FCFRD #FairfaxCounty pic.twitter.com/anISDlBcIs

Earlier: More than a thousand people are without power along Greensboro Drive in Tysons this afternoon (Tuesday).

The outage spans east of the Greensboro to the Spring Hill Metro stations along Greensboro Drive and is affecting 1,555 customers, according to the Dominion Energy power outage map.

An employee at United Bank told Tysons Reporter that she heard what sounded like an explosion before the power went out around 3:30 p.m. — it is unclear if the loud sound is connected to the outage. 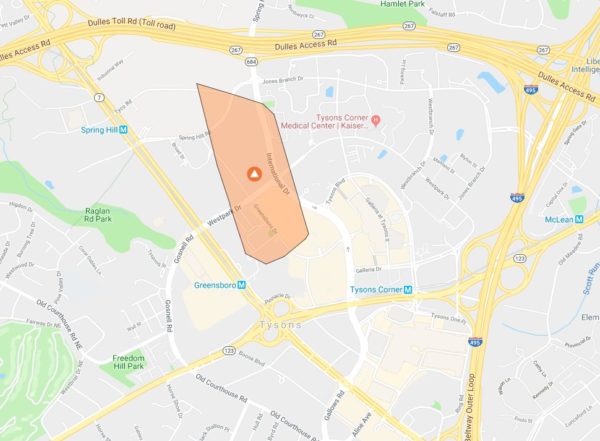 The cause of the outage is “pending investigation,” according to Dominion Energy.

Traffic lights are out at Greensboro Dr./Westpark Dr. Our motor units are working to have the lights restored as soon as possible. Thank you for your patience – please stay clear of the area! #FCPD pic.twitter.com/0XGdZFPOuN

Jay Westcott contributed to this story