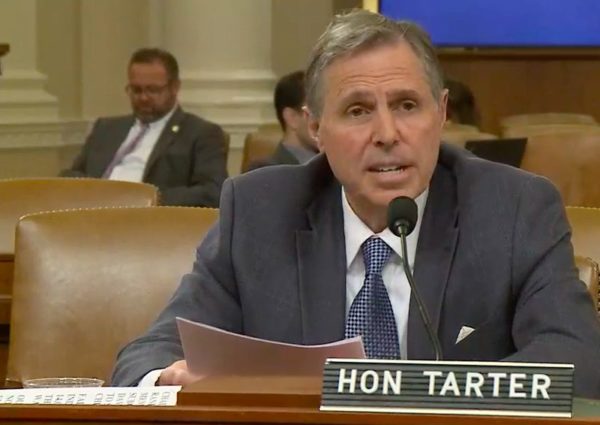 The City of Falls Church mayor is fighting a federal tax law change that he warns will put a strain on local residents.

In December 2017, Congress passed a new law that limits the amount of state and local taxes (SALT) that people can deduct from their federal income tax return to $10,000.

Known as the SALT deduction cap, this law has stirred up controversy.

Some people claim it puts people in areas with a higher cost of living at a disadvantage because they will likely pay more in taxes, while others say that SALT deductions disproportionately benefit a small proportion of wealthy taxpayers.

In June, Mayor David Tarter spoke in front of the House Ways and Means Subcommittee by invitation of Rep. Don Beyer (D-Va.) regarding the recent cap on the SALT deduction policy.

Tarter said he is one of a few politicians across the country that are spearheading an effort to reverse the decision or minimize the damage they say it will have on their communities in the near future.

“The new cap on the SALT deduction double taxes citizens on these payments and penalizes workers in high-cost areas, like my city, where wages and income are high but are fully matched by the cost of living,” Tarter told the committee, adding that the new law takes away more tax dollars from the city.

Falls Church City Manager Wyatt Shields, who manages the city’s finances, told Tysons Reporter that Falls Church residents spend more on housing comparative to anyone else in the country. He added that this new legislation only “exacerbates” the city’s lack of affordable housing.

According to Tarter’s statement to the committee, the median home price in the city is around $825,000 — “That doesn’t buy you a mansion but likely a modest brick rambler built in the 1950s.”

Despite the fact that Fairfax County is among the richest counties in the nation, it still has problematic financial burdens that lawmakers are attempting to solve.

“I’ve heard from a fair amount of people how their taxes have gone up and not at first realized implications,” Tarter told Tysons Reporter while talking about the fallout from the law.

The Internal Revenue Service (IRS) announced Wednesday, Aug. 14, that they will waive the tax underpayment penalty for more than 400,00 people who did not claim a special penalty waiver when they filed their federal income tax returns this year.

“Earlier this year, the IRS lowered the usual 90% penalty threshold to 80% to help taxpayers whose withholding and estimated tax payments fell short of their total 2018 tax liability,” according to an IRS press release.

Locally, this may help residents in the Northern Virginia area who were hit with unforeseen financial burdens recently because of the SALT deduction cap.

“There are no yachts in Falls Church, just lots of hard-working families trying to get by in the high-rent district,” Tarter said. “Most of the folks that I know are two-income families who serve their country through work in government or the military and want the best education possible for their children.”

Ultimately, Tarter hopes that the SALT deduction cap, currently sitting at $10,000 per household, is heightened or eliminated entirely.

“The next steps are up to Congress,” Tarter said. “I suspect, given the way things are right now, there probably won’t be any immediate action.”