The Falls Church City Council aims to revamp its approach to affordable housing as its population continues to grow — and the stock of affordable units quickly dwindles.

The City Council is considering refreshing its Comprehensive Plan’s housing guidelines with a focus on tackling what some councilmembers recently referred to as an “affordable housing crisis.”

At a joint work session on Monday (July 15), the council and the city’s Planning Commission reviewed a proposal that would revise the housing guidelines to adjust for demographic changes and the future impact of Amazon HQ2 on the region.

City documents at the meeting confirmed that the increasing demand for apartments cannot keep up with the influx of the population, which is growing at a rate of 2.6% each year.

Councilmember Letty Hardi fronted the discussion at the meeting when she brought up the expiration of affordable housing and the dilemmas facing recent graduates who can no longer afford to live in the area. 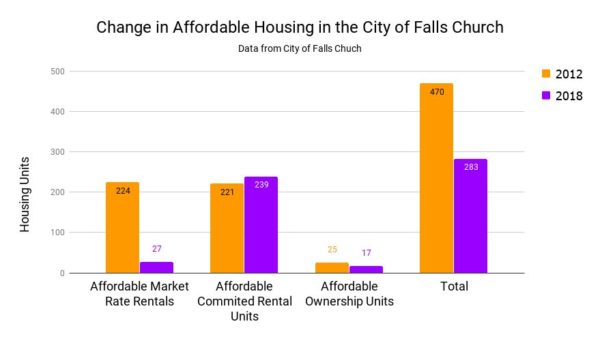 Affordable housing hasn’t seen a large overhaul in Falls Church since the council implemented the Affordable Dwelling Units (ADU) in 2002.

Currently, the city can negotiate with developers for more than the 6% of new condos and apartments required be ADUs, according to the city’s Housing and Human Services Department.

“You can’t build it fast enough in this reality. At 6% we are never going to make up this number,” Hardi said.

She added that the clock is running out on the Fields of Falls Church, the city’s largest affordable housing complex in the area. Its affordable rental homes are set to expire in 2026, and as of July, the complex had 96 units.

“That should be a big wakeup call for us,” Hardi said in reference to the upcoming expiration of other ADU units across Falls Church, which the draft guidelines reveal new data about.

In 2012, there were 25 homeownership AUDs in Falls Church, according to the guidelines. Upcoming in 2021, this number may drop even further to 13 homes unless the city extends the contract with the Byron Complex.

Meanwhile, for affordable rental homes, seven of the nine buildings, which include Fields, Pearson Square, Read Building and West Broad Residences, are set to expire at various times before or in 2035. 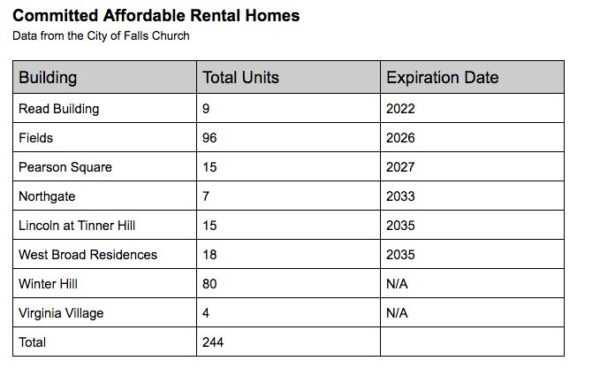 Tentative Goals for the Housing Plan

As of the Monday meeting, the council narrowed its key housing goals to a list of nine focus points for the proposed guidelines and a newly revised mission statement:

Create and maintain a diverse supply of housing that supports an inclusive and welcoming community. As the region continues to grow, work proactively to ensure affordable housing keeps pace with population increases and is available for a range of incomes, household sizes, generations, and needs.

The top implementation goals include the preservation of tree canopies in the area and creating a variety of housing types, which could lead the area to see the construction of one, two and three-bedroom condos and family homes.

Other proposed goals in the plan also include seeking help and partnerships from non-profits, agencies and neighboring districts and providing housing for people with disabilities.

While several councilmembers said that plan is a step in the right direction, they pointed to other factors that could greatly impact affordable housing in the city, like raising the 6% rule and offering more small condominiums.

“Six percent is good,” Councilmember Phil Duncan said. “It’s just going to not get us there in any shape or form.”

Duncan also pushed for more affordable condos in the city. “We’re not going to make significant progress until we try to find some opportunities in the city [that],” he said.

Councilmember David Snyder chimed in, adding that he wants to see more opportunities for people to buy homes — especially condos.

“We can talk about affordable, subsidized if you will, rental housing, but you really aren’t going to get people out of the cycle of poverty,” Snyder said, adding that home ownership is “traditionally how much of the wealth in this country has been created and denied.”

Councilmember Ross Litkenhous also expressed support for smaller condos, however, he noted that the city is constrained by its size and available space. “We are 2.2 square miles,” he said. “We need to be honest with ourselves to effectively accomplish this.”

In addition, Litkenhous said the city is also bracing for a wave of new residents once Amazon arrives in neighboring Arlington.

A recent report by the Northern Virginia Association of Realtors and the George Mason University Center for Regional Analysis estimated that roughly 33% of Amazon’s workforce will live in Fairfax County — more than double the 16.4% expected to live in Arlington.

“It’s only going to be excerbated by Amazon,” Litkenhous said.