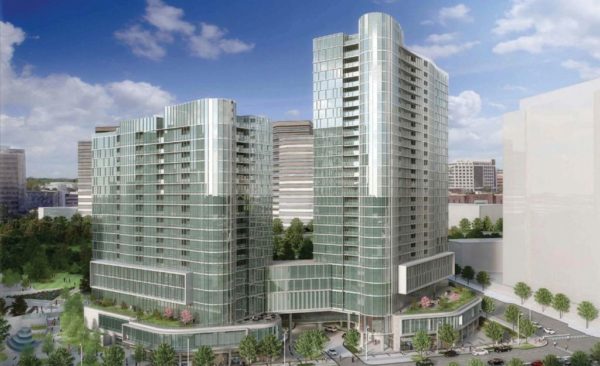 The Fairfax County Planning Commission greenlighted yesterday (June 12) a proposed senior living facility in Tysons despite concerns from staff about the height, size and open space.

The proposed building would go 60 feet above the 225-foot maximum. “The excessive height combined with a narrow building footprint oriented diagonally results in a building mass that inconsistent with adjoining structures and overwhelms the street,” according to the staff report.

While Providence District Planning Commissioner Phillip Niedzielski-Eichner called the proposal “one of the most complicated applications the commission will recall,” he ultimately brought forth a motion to approve the project.

Before the vote, Niedzielski-Eichner asked staff to address each of the three major concerns and allowed the applicant’s representative, John McGranahan Jr., to respond.

McGranahan argued that the recommended denial by staff was not considering the proposal’s height and size in the context of the surrounding neighborhood.

A staffer said that the mass of the building was considered to be out of context to the nearby buildings and that the applicant’s desire for more height for operational and financial considerations wasn’t enough justification to go above the maximum height.

Staff and McGranahan also disagreed on the relocation and redesign of the open space.

By the end of the back and forth, Niedzielski-Eichner said he was persuaded by the applicant’s reasoning.

Now that the proposal has a favorable recommendation from the Planning Commission, it heads to Fairfax County’s Board of Supervisors.

The project is a part of Cityline Partners LLC’s Arbor Row project near Tysons Galleria, which includes the completed Nouvelle residential building and The Monarch. The development aims to transform the back end of Tysons Galleria along Westpark Drive into a suite of mixed-use buildings.