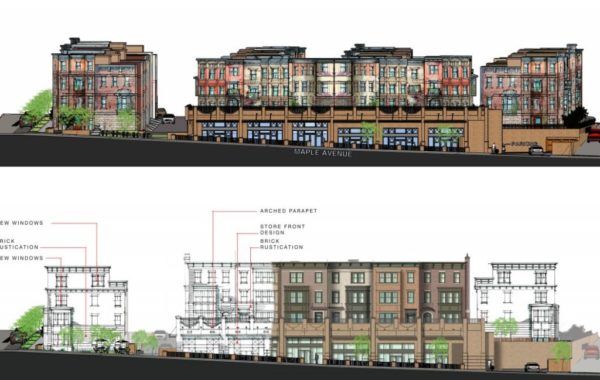 Vienna’s Board of Architectural Review (BAR) decried plans for the Vienna Market project as rigid, plain and unbecoming for Maple Avenue.

At a work session on May 24, the BAR met with the developers of the project set to replace the Marco Polo building and other surrounding properties. The proposed project would add 44 condominiums and 8,200 square feet of retail space — along with a 32-space underground parking garage — to 245  W. Maple Avenue.

While the project’s architects discussed adding “rustification” and more brick to the building, BAR members expressed frustration with how bland the project appeared.

“My main concern here is the overall feel has gone [away] from all four sides offering something of interest and unique in the town,” Laine Hyde, the vice chair of the BAR, said. “I look at all four sides and I see flat. I’m not seeing the detail and mix of materials. I’m not seeing the variety of individual buildings; just sameness on all sides.”

Paul Layer, the chair of the BAR, said that earlier towers and variance to the rooftop gave the building some prestige on the Maple Avenue side.

“I think Maple Avenue deserves more than this building next door,” Layer said.

But the designers of the building noted that the project is trapped between ambitions from the BAR and a community that regularly rallies against projects that don’t fit with existing buildings on the street.

“We are trying to keep the building grand,” Bill Foliaco, a representative from Lessard Design, said. “It’s going to be large. But we wanted the storefront to feel like more than standard suburban town center. We want this to feel like it’s been here a while, not brand new. My concern is not financial, but in the current world we live in, I’m afraid it won’t come out the way we imagine it.”

The BAR concluded that another work session will need to be held at an unspecified date for it and the developer to continue working together to find something that will not only satisfy both parties but is likely to be approved by a Vienna Town Council with a new, decidedly anti-outsized development bent.

Image via Vienna Board of Architectural Review