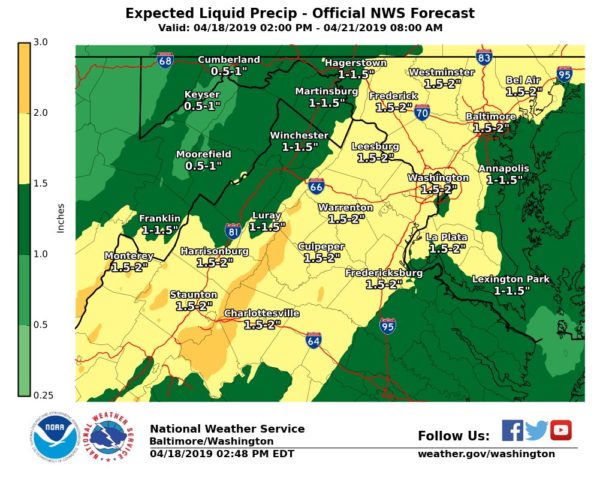 Update 1 p.m. — The National Weather Service has issued a Tornado Watch for the region until midnight with Flash Flood Watch remaining in effect.

Hope you brought a rain jacket, Tysons, because the region is expected to get soaked this afternoon (Friday) through tomorrow morning.

A Flash Flood Watch has been issued for the region, including Fairfax County, with 1.5-2 inches of rain expected but even more possible. More from the National Weather Service:

…FLASH FLOOD WATCH REMAINS IN EFFECT FROM NOON EDT TODAY THROUGH LATE TONIGHT… SHOWERS AND THUNDERSTORMS WITH HEAVY RAIN ARE EXPECTED TO OVERSPREAD THE REGION BY THIS AFTERNOON AND CONTINUE THROUGH THIS EVENING BEFORE DEPARTING LATE TONIGHT. REPETITIVE STORMS AND MULTIPLE ROUNDS OF HEAVY RAIN MAY RESULT IN RAINFALL AMOUNTS WHICH COULD EXCEED 3 INCHES LOCALLY. FLASH FLOODING IS POSSIBLE, PARTICULARLY IN URBAN AREAS AND IN AREAS OF STEEP TERRAIN. PRECAUTIONARY/PREPAREDNESS ACTIONS… A FLASH FLOOD WATCH MEANS THAT CONDITIONS MAY DEVELOP THAT LEAD TO FLASH FLOODING. FLASH FLOODING IS A VERY DANGEROUS SITUATION. YOU SHOULD MONITOR LATER FORECASTS AND BE PREPARED TO TAKE ACTION SHOULD FLASH FLOOD WARNINGS BE ISSUED. &&

The flooding potential is of particular concern to parts of the Tysons, McLean and Vienna area that are flood prone.

Severe thunderstorms with considerable potential for producing DAMAGING WIND gusts and a few tornadoes are LIKELY across much of the southern through mid Atlantic Coast region, particularly across the Carolinas into southern/central Virginia, THIS AFTERNOON and EVENING. @NWSSPC pic.twitter.com/3GItR4Z0Rg

With storms in the forecast, several airlines, including @united & @Delta, are offering change fee waivers for travel today. Contact the airline directly if travel plans are impacted by weather & be sure to double check the status of your flight before coming to the airport. pic.twitter.com/HaFHwIWP50