If the roads have seemed a little rougher than normal, it’s not just you.

According to the Virginia Department of Transportation (VDOT) officials at a meeting earlier this month, the past year has been one of the worst years on record for potholes. The pothole problem is also prevalent in D.C.

According to Allison Richter, liaison to Fairfax and Arlington counties for VDOT, fewer than half of the secondary roadways are in good condition. For 2018, interstates were 86 percent in fair or better condition — down from 93 percent in 2016. But secondary roadways were assessed at only 41 percent fair or better condition, an improvement from 2016 but still bumpy for drivers.

“This is possibly the worst year for potholes that I’ve seen,” said Richter.

Richter said many roads throughout the area qualify for paving, but VDOT hasn’t been able to get to all of them. Road repaving is based not just on the condition of the pavement, but on traffic volume, whether the whole neighborhood can be repaved, and various costs.

“Paving funding has gone up and down,” said Richter. “We’re behind, it’s why so much is in the red.”

While Northern Virginia generates a disproportionate amount of tax revenue compared to the rest of the state, Richter said road funding is one area where the region uses proportionately more funding than other parts of the Commonwealth. 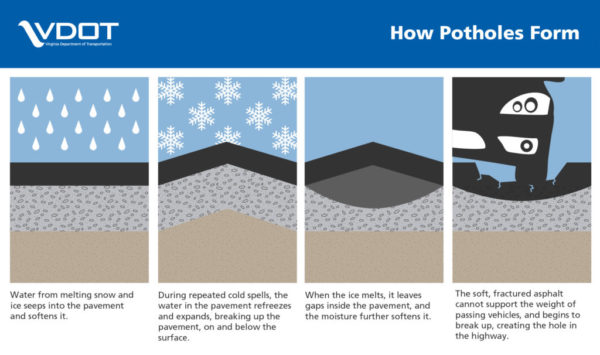 In addition to years of repaving neglect, Richter said the pothole situation is the result of record high rainfall and dramatic temperature swings.

Richter said repaving is scheduled to get started this month once temperatures are warm enough.