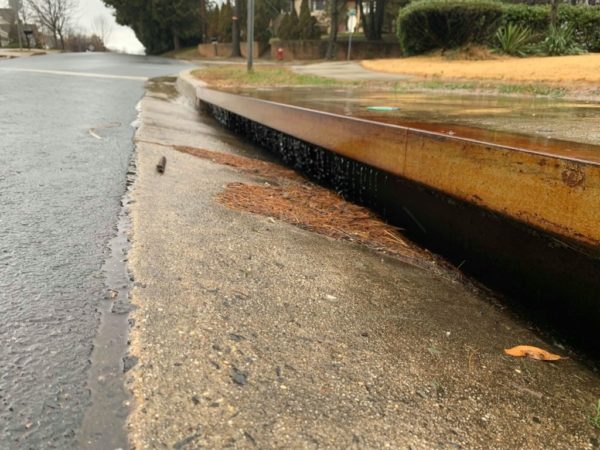 Vienna tends to flood. Recent heavy rainfall has not only impacted local streams, but locals may have seen high water in Vienna’s downtown area near the Town Green.

It’s an issue that town staff have been working for years to address, and solutions have been identified, but year after year have remained unfunded.

A report presented to the Vienna Town Council in December 2016 examined the state of Vienna’s sewer infrastructure, particularly at the intersection of Maple Avenue and Center Street N. in the center of the town.

The study found that there were places that experienced significant flooding where existing sewer infrastructure was unable to handle storm volume. Town staff confirmed that improvements suggested in the study were included in the CIP, but have yet to receive funding.

The report indicates that there are three major locations for flooding in three different areas. According to the report:

The report notes that flooding at the Starbucks is generally seen as the first sign of storm sewer capacity issues. The report noted that the ponding at these issues is more indicative of capacity problems than issues with draining.

“The ponding in all three areas of concern is a result of storm sewer surcharge, rather than surface drainage issues,” the study said. “This is evidenced by the ponding that occurs during a storm event and the rapid dissipation of ponded water immediately after the rain intensity subsides.”

The study assessed every outfall and junction in downtown Vienna and found that the system is unprepared for handling severe storms.

“The flow capacity of portions of the existing storm sewer system is insufficient to carry the stormwater calculated for a 10-year frequency storm,” the study said.

Ten-year floods are floods that have a 10 percent chance of happening in any given year, though there is some concern that this type of descriptor can lead to a false sense of security for those in areas prone to flooding.

Crucial to any fix to the local sewers, the study said, would be preventing flooding at the Freeman House and Starbucks, which are most prone to flooding.

The report recommended clearing debris and obstructions to sewer flow but that more substantial improvements will be needed over time.

“Even with clean sewers, the flow capacity in the piped portion of the system is lacking in two general areas,” the study said. “Sewer system improvements will be needed if the system is expected to move the flows resulting from a ten-year frequency storm, without undue flooding.”