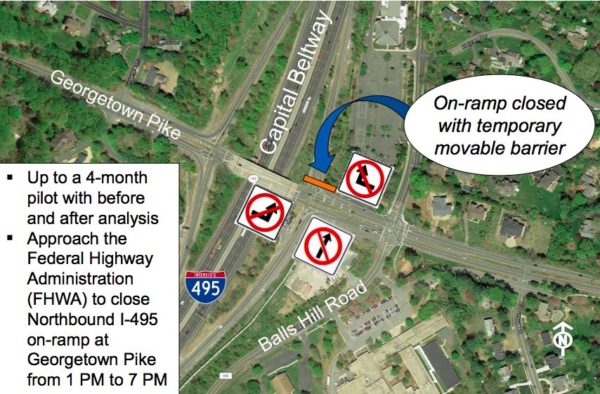 (Updated at 6:50 p.m.) There’s skepticism in McLean about a plan to close Beltway access during weekday afternoons, but the McLean Citizens Association may vote to support a pilot phase for the project.

Tomorrow evening, the McLean Citizens Association (MCA) Board of Directors is scheduled to vote whether or not to endorse the Virginia Department of Transportation’s (VDOT) pilot program for a controversial proposal to close the northbound ramp from Georgetown Pike onto the Beltway during evening rush hour.

The MCA Board of Directors meeting is open to the public and will be held at 7:30 p.m. in the McLean Government Center (1437 Balls Hill Rd).

The logic of the MCA’s resolution is that the four-month inconvenience of testing the closure is better than a more permanent change based on traffic model predictions alone. Among alternatives proposed by the MCA to closing access to the Beltway would be tolling the ramp.

The proposal stems from the heavy amount of cut-through traffic driving through the largely residential McLean streets to avoid traffic jams on the Beltway. The northbound ramp from Route 193 (Georgetown Pike) onto the Beltway in McLean is the last entrance before the American Legion Bridge, a major bottleneck for regional traffic.

The problem has been exacerbated by the rise of apps like Waze and Google Maps, which encourage Maryland commuters to use McLean streets as a shortcut, according to local residents.

VDOT’s proposed pilot program would close the northbound ramp from 1-7 p.m. on weekdays for a four-month trial, during which VDOT would collect data on whether the closure was successful in reducing cut-through traffic.

VDOT has previously held two meetings on the subject, during which most of the feedback was critical of the proposal. Residents in McLean and Great Falls said the proposal would force residents to take a more inconvenient route to access the Beltway.

Also under consideration is an alternative proposal put forward by one member of the MCA, which calls for VDOT to halt all consideration of the project entirely.